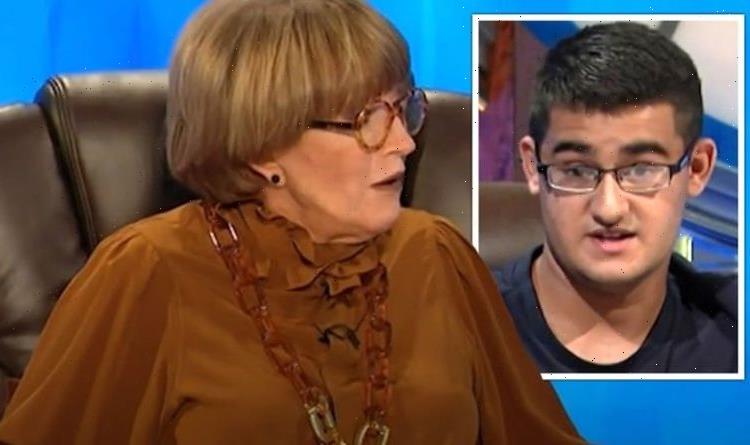 During the episode, Countdown presenter Anne Robinson, who turns 77 this week, spoke to teenage contestant Daniel about clubbing. The 17-year-old told the Channel 4 presenter he wouldn’t take her clubbing because she was “too old” for it, while the former Weakest Link host joked that he had “cheered her up”.

Anne asked Daniel what he gets up to for fun in Swindon, to which he replied: “Not much, I run my own YouTube and Daily Motion account and I go on social media, clubbing…”

“Could you take me clubbing?” Anne asked the contestant, who shook his head.

“No,” he replied as people in the background laughed. “Why not?” Anne inquired.

“You’re too old,” Daniel answered harshly. He added: “And people wouldn’t know you.”

Anne continued: “I couldn’t get a date there?” as Daniel responded: “No.”

As laughter and gasps ensued behind the camera, Anne admitted: “Okay, well that’s really cheered me up.

“Let’s give a round of applause to our contestants.”

Broadcaster and Countdown guest Kay Burley was laughing at the interaction.

“That wasn’t funny Kay Burley,” Anne remarked when she noticed her chuckling.

“I think the queen of mean has met her match,” Kate commented.

Susie Dent added: “We’ll go out clubbing with you, Anne.”

“Thank you,” Anne laughed before moving on with the show.

Anne took over as Countdown host from Nick Hewer earlier this year.

The journalist is known for her stern attitude towards contestants, which she made famous on her quiz show The Weakest Link, which ran from 2000 to 2011.

Usually, it’s her hurling the insults out at players, so the team was shocked to hear Daniel’s jokes towards her.

But the teenager ended up winning the show, beating fellow contestant Stephen.

“Thank you so much for taking part,” Anne told Stephen. “I’m afraid you met your match.”

Countdown airs on weekdays at 2.10pm on Channel 4.