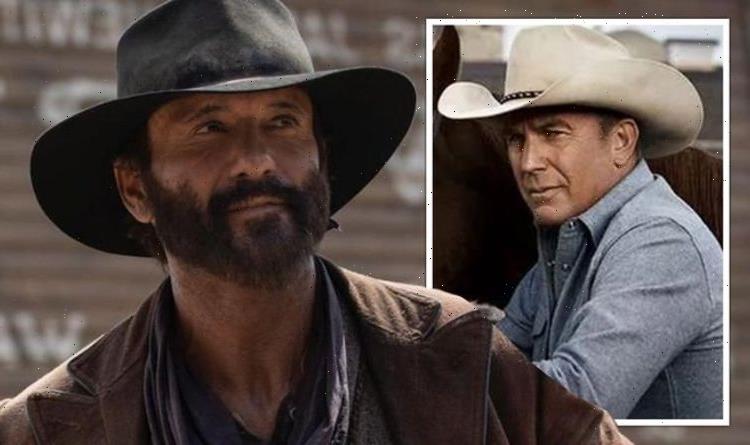 Yellowstone: Jen Landon on Teeter’s return to the ranch

Yellowstone fans were delighted to tune into the premiere of the Western melodrama’s prequel series, 1883. The historical drama airs on Paramount Plus, and it tells the story of John Dutton’s (played by Kevin Costner) ancestors. Fans are keen to know how James (Tim McGraw) and Elsa (Isabel May) Dutton are related to John.

James Dutton (Tim McGraw) is looking to make a new life for himself in Montana with his wife Margaret and his children.

He has lived a life of poverty and is keen to provide a better future for his family.

One of his sons is John Dutton senior, who went on to become John Dutton’s grandfather.

There is another John Dutton Junior, played by Dabney Coleman, thrown into the mix.

With this in mind, James Dutton is John Dutton’s great-grandfather.

Margaret is the wife of James in the prequel series and she is played by McGraw’s real wife, Faith Hill.

The co-lead of the series and her husband are at the basis of a long ancestry.

For generations, her family has fought to protect and expand the land in their ownership.

She has a daughter called Elsa in the series. Margaret is John’s great-grandmother.

Elsa (Isabel May) is the main narrator in the series and she is the eldest daughter of James and Margaret.

The free-spirited character is able to see the beauty in everything, but she knows how to get herself out of a difficult situation.

Elsa is the sister of John Dutton Senior, but her relationship with Costner’s character is more complicated.

Elsa’s personality traits are evident in some of the Yellowstone characters, including Beth (Kelly Reilly) and Tate (Brecken Merrill).

John Dutton Senior (Audie Rick) is Elsa’s brother in the series and is the son of James and Margaret.

The character has also appeared in the original Yellowstone, played by Jack Michael Doke.

While some fans thought he was the father of Costner’s character, there is also a John Dutton Junior mentioned.

It is John Dutton Junior who is Costner’s character’s father, making John Dutton Senior his grandfather.

James and Margaret are the first-generation ranchers of the Dutton family.

The prequel series kicked off with a bang, featuring two shocking cameos and a devastating death.

Billy Bob Thornton is introduced as Marshal Jim Courtright, who is based on a real historical character.

Tom Hanks also made an appearance as a Union general, who tried to comfort James after the Battle of Antietam.

Yellowstone 1883 airs on Sundays on Paramount+