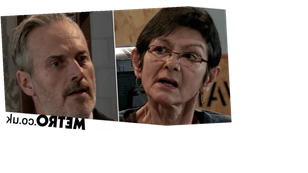 Yasmeen Nazir (Shelley King) evidently wasn’t in the mood for Ray Crosby’s (Mark Frost) behaviour in Coronation Street, and therefore she bravely stood up to him.

Yasmeen had packed up all her belongings, as she — like several other residents of the street — prepared to vacate her beloved home.

However, when Ray’s funds didn’t clear, the sale of the properties was temporarily halted — something which Alya (Sair Khan) thought to be a positive sign.

The moving process was stopped until further notice, and therefore several of the cobbles finest awaited for Ray in Speed Daal — desperate to know what happened next regarding their homes.

Ray soon showed up and revealed that there had merely been a delay, and thus they will still need to vacate the premises.

However, Yasmeen wasn’t willing to be bullied by the hotelier.

‘You know, you remind me of someone I used to know,’ Yasmeen said to Ray, evidently referencing Geoff Metcalfe. ‘He was a nasty bully too.’

‘I have no intention of leaving. Until my solicitor tells me otherwise, my house remains precisely that: my house!’

‘Now, as I think my granddaughter would say: Jog on!’

‘You owned him,’ Alya said.

‘I did. Didn’t I?’ Yasmeen responded with glee.

Yes, yes you did Yasmeen!