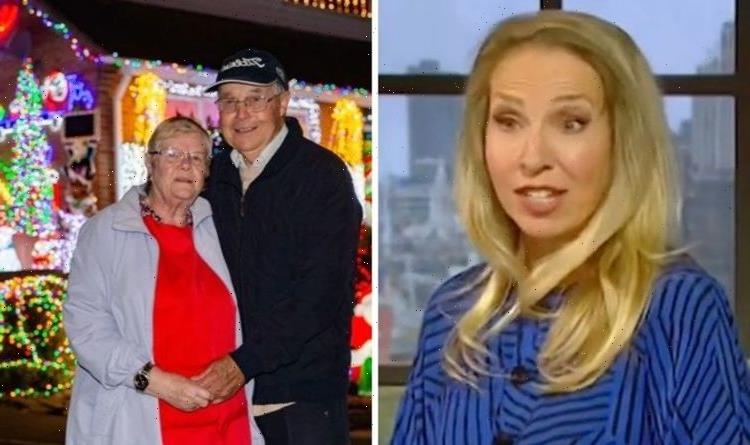 Jeremy Vine welcomed Lowri Turner and Graeme Brown onto his Channel 5 show on Monday. At one point in the programme, the panellists discussed whether Christmas lights should be banned in an effort to help the UK “go green”. Viewers Helen and John Attlesey phoned in to talk about their own extravagant decorations but were shut down by Lowri who suggested it must be expensive to keep the display running each year and perhaps Christmas lights should be banned in order to save energy.

Lowri claimed: “The winter fuel allowance is not going to cover that!”

“How much extra does it cost you in electricity for these lights?”

Helen revealed she wasn’t sure as she doesn’t receive an electric bill for the holidays alone.

“We don’t really know because I pay the bill and part of it goes towards before Christmas, and another bill comes in after Christmas.”

Despite the high cost of the display, Helen and John’s efforts are always appreciated by their neighbours in Cambridgeshire.

Plus, the extravagant light show raised £12,895.57 for charity last year as visitors are encouraged to leave a donation.

Helen explained: “We’ve done it since about 2012, but COVID last year we did exceptionally.

“I think people were so fed up, but they did come out and they were so generous.”

Jeremy asked his guest if the house had ever caught fire as a result of the sheer number of lights.

Helen let out a giggle and assured the Channel 5 host it hadn’t.

Co-presenter Graeme also assured viewers that Helen specifically seeks out LED lights to ensure the display is as environmentally friendly as possible.

However, the discussion still prompted a fierce debate amongst viewers when the topic was presented on Twitter.

“Turning Xmas lights off will definitely cancel out the effects of raw sewage being pumped into our water.”

And RC8R argued: “The 100s if 1000s of tiny led lights that lift spirits and give joy use far less energy than most house lights, let alone TVs and especially kettles.”

And Mark Wilco634 suggested: “If they can be powered by green energy why not, many solar-powered lights are available.”

Defending her energy use, Helen explained: “When we started most of them were LED lights anyway.

“The days have gone by that you had a big bulb and sort of plugged it in. There’s nothing like that.”

The Attleseys’ display may rack up a sizeable electricity bill, but Jeremy and his guests were assured that the environmental cost was much more manageable.

Jeremy Vine airs weekdays at 9:15am on Channel 5.