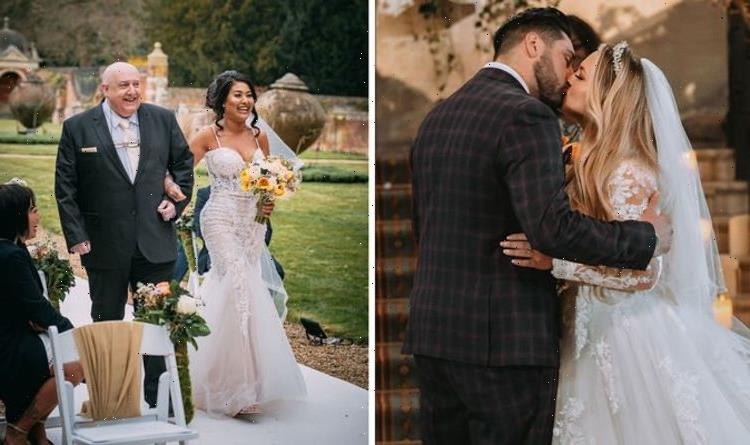 Married At First Sight UK has returned for a sixth season and this series is bigger and better than ever. With even more couples meeting for the first time at the altar, the drama has already started to show. Director at The Family Law Company, Rachel Buckley, opened up about the complex process.

Why can’t the MAFSUK couples get legally married?

MAFSUK has returned with a much improved season this year as it has taken inspiration from the Australian version.

The series started with 16 singletons as they were paired off into couples by a panel of relationship experts.

The first time they laid eyes on each other was at the altar, and for some, there was an instant connection.

For others, they have already left the experiment due to the lack of compatibility.

Viewers often ask whether the marriages are real, and Express.co.uk has all you need to know.

The couples do not take part in a legally binding marriage, and instead, they hold an unofficial commitment ceremony.

Although they say their vows, choose their wedding dresses and enjoy a wedding reception, the ceremony is not a legal act of commitment.

Director at The Family Law Company, Rachel Buckley, explained the process and what complications could arise.

Asked whether the couples have to stay married for a year before they can get divorced under English law, she said yes.

She added: “But they could apply for an annulment providing certain conditions are met. However, there could still be financial implications for them as a result.”

Some reports have suggested the couples have a prenup before the weddings, meaning a prenuptial agreement.

This is where couples lay out who will be responsible for the property and finances of each partner during the marriage.

Due to the nature of the experiment, the process before the wedding day is slightly different.

Rachel said: “I understand that the premise of this programme is that they will not have met/know the name of the other party prior to the marriage.

“Prenuptial agreements are, potentially binding on the parties but not necessary upon the court if they eventually divorce.

“For a pre-nuptial agreement to be as binding as possible, each party would have to disclose their financial situation to the other and have to know various details about the others circumstances – including their name and address as that is contained in the prenuptial agreement.

“Each party would have to have had the opportunity to have legal advice upon the contents of the pre-nuptial agreement.”

With this in mind, it is unlikely the couples would have had the chance to do this before the experiment started.

According to some of the crew on the show, the TV production company will help pay for a divorce for a year if the couples choose to split up.

Commenting on whether the pairs could face a big bill if they split, Rachel said: “Yes – the longer the marriage goes on the more likely that it will be considered a partnership where the assets would be shared.

“Or at least the financially weaker party would need to meet the other parties housing, income and pension needs.

“The longer the marriage, the more likely that there will have been some mingling of assets and other complicating factors such as children, inheritances and contributions.”

So is it overly complicated for the couples to actually get married? Rachel says it could happen.

She added: “No, getting married is fairly non-complicated. Care would need to be taken if the programme-makers were to look into having “promise” ceremony or “commitment” ceremony which could be found to be quasi marriages thus opening up the parties to being able to claim financial remedies from the other.”

A spokesperson for the show recently told the Metro about how the couples make a verbal commitment, not an official one.

They said: “Following the Australian format, rather than legal marriages, the couples will make a lifelong commitment to one another at a glamorous ceremony, overseen by a wedding celebrant, that includes guests, bridal gowns, dancing, speeches and cake.”

Married At First Sight UK airs from Mondays to Thursdays at 9pm on E4.