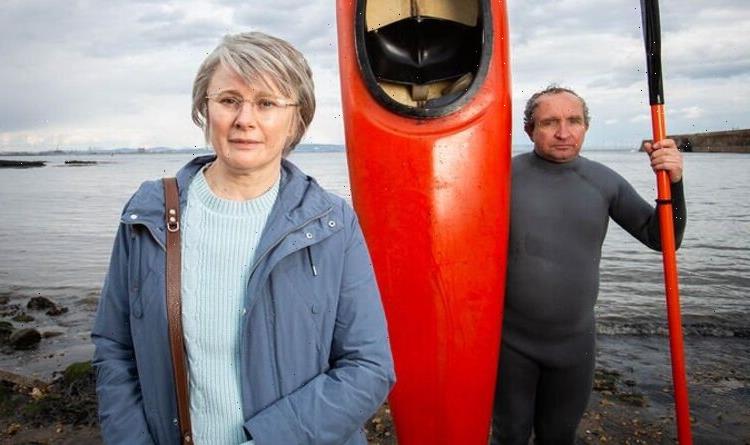 The Thief, His Wife and the Canoe: ITV shares first look at series

John and Anne Darwin are played by Eddie Marsan and Monica Dolan in ITV’s The Thief, His Wife and the Canoe. The four-part TV series was based on the memoir by journalist David Leigh, who made contact with mother-of-two Anne. Writer Chris Lang and the cast spoke to Express.co.uk and other press about what happened to the Darwins.

Where are John and Anne Darwin now?

The series is based on the true story of the couple who were caught in Panama as they hoped to start a new life for themselves.

Having found himself in mounting debt, John Darwin wanted to find a solution.

Instead of declaring bankruptcy, he decided to fake his own death, convincing his wife to go along with his plan and claim his life insurance.

He and Anne had convinced the world he had died during a canoeing accident off the coast of Seaton Carew.

Their secret was exposed by an infamous photo of the pair posing in a Panama real estate office in July 2006.

Writer Chris Lang addressed whether the Darwins had been involved in the TV adaptation of their extraordinary story.

He told Express.co.uk and other press: “We approached them all and none of them were interested in discussing or collaborating on the project.

“Dave Leigh was the journalist who broke the story which was part of the research into the project.

“He does still speak with Anne and has a good relationship with her, so Dave has hopefully been able to reassure her it is as sympathetic a telling of her story as is possible.

“But no, they didn’t want to get involved.”

Both John and Anne have recalled their story numerous times in public.

Anne went on to write a book and her two sons, Mark (Mark Stanley) and Anthony (Dominic Applewhite), have taken part in various interviews.

Chris added: “John tried to write a book, an autobiography in prison, and oddly it didn’t get a publisher.”

John now lives in the Philippines and is remarried.

Actor Eddie Marsan, who plays John in the series, opened up about why he did not speak to him for insight.

He said: “I think if John had the self-awareness to be able to give me some kind of insight into himself, he wouldn’t have done it.

“So I don’t need to sit and listen to someone like that.

“I think how much they really understood why they did what they did…it’s complicated.”

Anne actress Monica Dolan also discussed whether she had spoken to her real-life counterpart.

She said: “No. I read her book, but I was very much following the script.

“From the beginning, Anne didn’t want to contribute to this production.

“She’s done her time and I respect that. I’m okay to leave well enough alone.

“Also, I’ve learnt that the least useful thing an actor can bring into the room is judgement.”

At her trial, Anne said she had been coerced by her husband into going along with the plan, but she was found guilty.

Both she and her husband were jailed for more than six years.

The Thief, His Wife and the Canoe airs on ITV on Sunday, April 17 at 9pm.