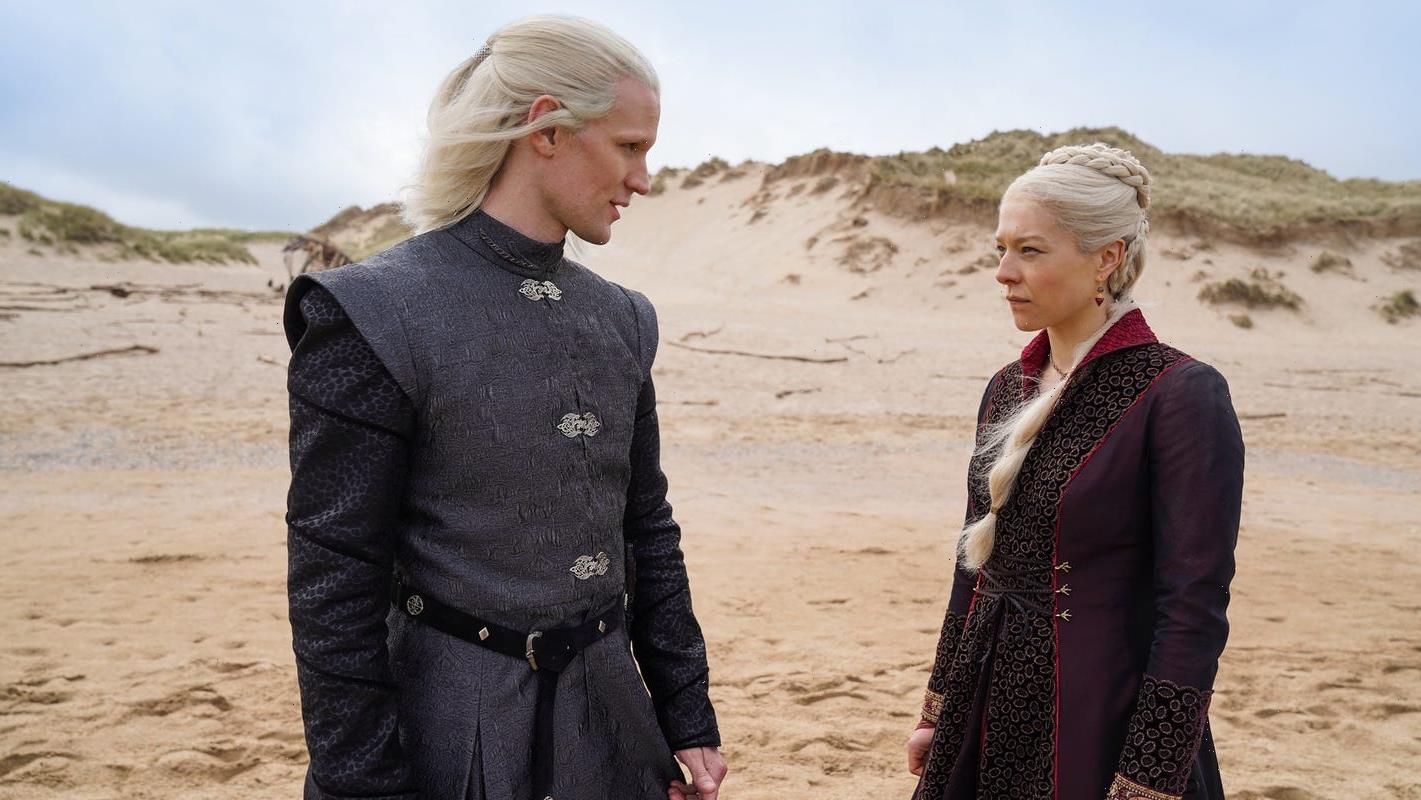 Westeros is back. And it’s very blonde.

HBO released the first images Wednesday from its highly anticipated “Game of Thrones” prequel series, “House of the Dragon.”

The series, based on author George R.R. Martin’s “Fire and Blood,” follows the the Targaryen family 300 years before the events of the original series. And in the first glimpse of the series, the relatives of Daenerys Targaryen (Emilia Clarke) are sporting the mother of dragon’s white-blonde hair.

“Dragon” recently began production and is set to debut in 2022.

The three images show five of the series’ characters standing stoically on a beach (maybe the shores of Dragonstone, the longtime seat of Targaryen power) clad in Westeros’ best finery. But the real hints for fans eager for the new series are in the character descriptions HBO provided along with the images in a news release.

One image shows Emma D’Arcy as Princess Rhaenyra Targaryen and Matt Smith (“The Crown”) as Prince Daemon Targaryen. A news release describes Rhaenyra as “the king’s first-born child, she is of pure Valyrian blood, and she is a dragonrider. Many would say that Rhaenyra was born with everything… but she was not born a man.”

Daemon meanwhile is the “younger brother to King Viserys and heir to the throne. A peerless warrior and a dragonrider, Daemon possesses the true blood of the dragon. But it is said that whenever a Targaryen is born, the gods toss a coin in the air…” The last line of his description indicates he might have some of the madness that plagued Dany’s father and brother in the original series.

In the next image, Steve Toussaint is pictured as Lord Corlys Velaryon, aka “The Sea Snake.” He’s the heir to a house of Valyrian blood as old as the Targaryens, and is “the most famed nautical adventurer in the history of Westeros. Lord Corlys built his house into a powerful seat that is even richer than the Lannisters and that claims the largest navy in the world.”

Olivia Cooke as Alicent Hightower and Rhys Ifans as Otto Hightower in "Game of Thrones" spin-off "House of the Dragon." (Photo: HBO)

The final still that HBO released also features characters not from the Targaryen family. Olivia Cooke (“The Sound of Metal”) is shown as Alicent Hightower and Rhys Ifans as her father Otto Hightower. Otto is the Hand of the King, a job “Thrones” fans will remember as a tricky and dangerous one that both Ned Stark (Sean Bean) and Tyrion Lyannister (Peter Dinklage) held at different points in the series’ run.

“As the Hand sees it,” the release reads, “the greatest threat to the realm is the king’s brother, Daemon, and his position as heir to the throne.” Alicent is described as a graceful and politically savvy young women who grew up at the court of the Red Keep.

“Dragon” was one of several prequels that began development at HBO, but ultimately the only one that was ordered to series. Another, starring Naomi Watts, filmed a pilot but was ultimately shelved by the network.