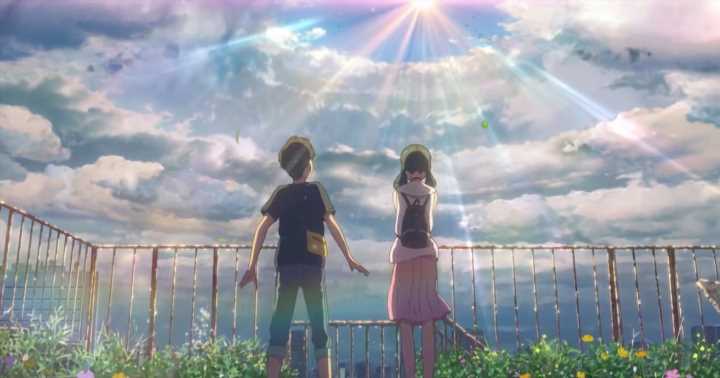 Shinkai Makoto, the fiercely idiosyncratic anime filmmaker whose long-simmering career exploded into legend when “Your Name” became an international phenomenon in 2016, has always been infatuated with the environment. The likes of “5 Centimeters per Second” and “Children Who Chase Lost Voices” may not express the same ecological concern that courses through Studio Ghibli’s work, but few movies of any kind have ever devoted more energy to — or divested more emotion from — the worlds around their characters. From unknown alien planets to rural Japanese footpaths, Shinkai’s backdrops are so lush, saturated, and ephemeral that the space between characters is best measured by heartache. And that heartache always rises, lifting our eyes towards the heavens like the light from a distant star. If Miyazaki is obsessed with airplanes, Shinkai is compelled by the sky.

Shinkai has never been known to shy away from his favorite subjects, and so it was always just a matter of time before he looked up from his desk and decided to make a film that’s literally just about the sky — a film that elevates the environment into a character of its own. Already a massive hit in its native Japan (as well as the country’s official submission for this year’s Best Foreign Language Film category at the Oscars), “Weathering with You” is nothing if not that film; from the very first moment of this stunningly beautiful, emotionally diluted metropolitan epic, the clouds are more than just a force of nature. They’re a portal, they’re a punishment, they’re what brings people together and keeps them apart. Here, the clouds are more intimately connected to human life than even the most extreme environmentalists would argue.

Of course, Shinkai fans know better than to expect him to make a clear, didactic parable about climate change; his stories tend to begin in a literal mode before the strain of distance pulls them apart at the seams, and narrative logic is sublimated into the stuff of pure feeling. “Weathering with You” is no exception. This may be a thoroughly modern fable about volatile storms and a young girl who has the power to stop the rain, but — for better or worse — it’s too soaked in raw teenage emotions to puddle into a simple tale about how we need to treat the Earth like we have a crush on it.

For a movie about the sky, “Weathering with You” is ironically one of Shinkai’s most grounded films — immediately more warm and engaging than “Your Name,” if not at all capable of delivering the same emotional payoff. Another romantically wounded yarn that starts with magical-realism before bleeding into fantasy, the film opens with a brief introduction to a Tokyo girl named Amano Hina (Mori Nana), whose dying mother is about to pass on to the other side. But Hina, sobbing at her mom’s bedside, is distracted by a pillar of sunlight that pierces through the clouds and points towards a Shinto shrine atop a derelict building nearby. Racing over to the Torii gate and praying for her future, Hina finds herself spirited away into a skybound dimension where her tears swim around her body like fish.

Back on terra firma, a very naïve 16-year-old runaway named Morishima Hodaka (Daigo Kotaro) barely survives a tempestuous ferry road into Tokyo. Unpredictable weather leads to volatile water, and the kid is almost tossed overboard before a sad-eyed stranger named Suga Keisuke (Oguri Shun) saves him at the last second. Alone and scared in the big city — where it’s poured every day all summer long — Hodaka might forget the warmth of kindness if not for the nice McDonald’s employee (Hina!) who spots him a Big Mac.

The twerp eventually moves in with Keisuke, and agrees to work as an indentured gofer at the scummy “National Enquirer”-esque rag he runs out of his apartment. His first assignment: Investigate rumors about “sunshine girls” who can stop the rain. That brings our nervous young hero to Hina’s apartment, where she lives with her whip-smart kid brother Nagi (Kiryu Sakura). In typical Shinkai fashion, it isn’t long before the three of them start a small, sweet-natured business in which they go around Tokyo and bring a patch of clear sky to any paying customers who need it for their wedding, cos-play event, or what have you (“Cool, let’s go make money with the weather!”). But messing with the skies, it turns out, also comes with another kind of cost. 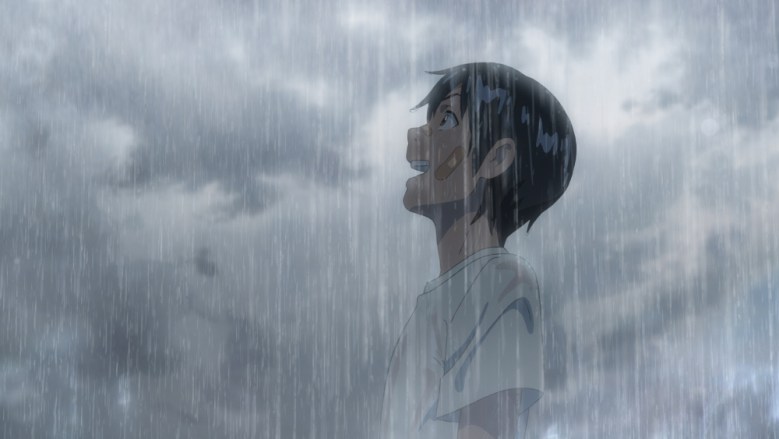 As per usual with a Shinkai film, the first thing you notice about “Weathering with You” is how beautiful it is. Tokyo may be the most frequently animated of cities, but it’s never been drawn to seem as vibrant and alive as it does here. The megalopolis is always in motion, as people continue to go about their business despite the apocalyptic deluge. The gray pall that hangs over Ginza can’t dampen the extraordinary detail that Shinkai’s team brings to the district’s fancy interiors. Rain streaks down on the commuters bustling into Shinjuku Station. The Yamanote Line cuts through Shibuya in such a vivid way that it will feel like a memory to anyone who’s seen that firsthand; it’s still packed during rush hour, as no one seems ready to throw in the towel. Somewhere, the umbrella industry must be booming.

Shinkai’s characters are drawn to scale — their lives feel small, and at the mercy of an indifferent world. Hina and Hodaka are essentially just well-rendered archetypes who are trying to get by and maybe hold on to a ray of sunshine. She’s sweet and mousy and totally egoless about her powers; he’s anxious and delicate enough to sweat up his own rainstorm. Neither of them ever threatens to become more dynamic than the circumstances that bring them together, and it grows even more frustrating than usual that Shinkai’s male, emo gaze tends to keep Hina at a remove (a problem the body-swap antics of “Your Name” enjoyably addressed). Anime is rife with enchanted girls in peril and boys who will risk their lives to protect them, and this is no exception; the more that “Weathering with You” leans on the relationship between its leads, the more tenuous their bond starts to feel.

The supporting cast is able to pick up some of the slack. Shinkai relies on little Nagi for comic relief and the schoolboy — a precocious ladies’ man who’s already forgotten more about women than Hodaka will ever learn — earns many of the movie’s biggest laugh (Nagi’s absurd role in a third act jailbreak is so inspired that it leaves you hoping Shinkai will lighten up with his next film). Keisuke might be the most nuanced character of all, even if the movie seems reluctant to explore his disaffected sadness.

As Hina becomes more indivisibly connected to the sky and the weather above Tokyo goes haywire, the chaos is most engaging for how it might fall on Keisuke and his asthmatic young daughter. But Shinkai doesn’t seem all that interested in the details of that interpersonal drama, backgrounding such things in favor of a wild, numbing, skybound finale that conflates suicide with climate change as it weighs immediate personal happiness versus long-term human survival.

For most filmmakers, that might not be much of a debate, but Shinkai isn’t afraid to reckon with the primacy of what people need in the here and now. “We only exist between Earth and the sky for a short while,” a wise old man insists. Tokyo used to be a bay, and if the water rises to reclaim it, well… maybe we’re a little too attached to the world that we know. If you only see “Weathering with You” through a certain lens, then it can seem a bit conflicted about our stewardship of the planet. Should we just do what makes us happy, and trust that future generations will roll with the punches? Surely that can’t be it.

It’s not so simple. If the unmoored third act is emotionally inert and hard to follow, Shinkai manages to eke a sliver of clarity out of the confusion. By the time the film is over, the climate change question almost feels like a red herring in a story that hinges on how people will possibly weather the storm that’s already here. Humans can’t afford to pretend that we don’t have some control over the environment, but we also can’t afford to act like the environment has complete control over us.

“Weathering with You” screened at the 2019 Toronto International Film Festival. GKids will release it in theaters later this year.