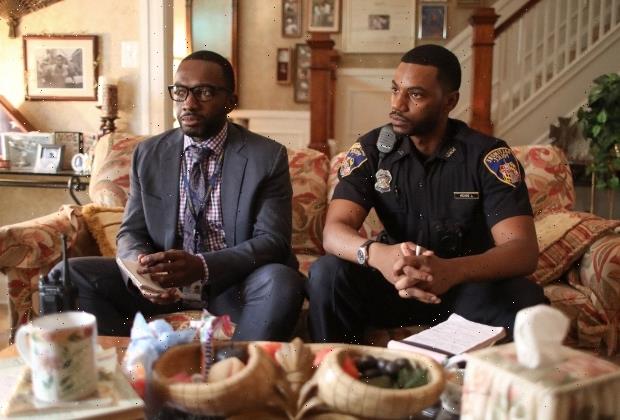 Actor Jamie Hector has played dozens of characters since costarring on The Wire in his breakout role as Marlo, a sinister drug dealer with a penchant for murder.

But Hector, who has had turns as everything from detectives to superheroes since the David Simon drama came to an end in 2008, credits the series for opening up a whole new world of acting on the big and small screen. This is one of the reasons he delighted in reuniting with Jermaine Crawford on this week’s We Own This City, he says.

Crawford costarred on The Wire as Duquan “Dukie” Weems, a kid whose impoverished lifestyle eventually led to drug addiction. The script got flipped on the latest We Own This City, however, when Crawford appeared as Officer Jaquan Dixon, a uniformed cop who helped Hector’s homicide detective Sean Suitor solve a murder case.

“I had spoken to Jermaine since The Wire ended, but I hadn’t seen him since then,” Hector happily tells TVLine. “It was a reunion and a feel-good moment. To see Jermaine in that role and knowing how talented he is felt like a win. He played Dukie, and I played Marlo, but there we were, in roles completely different from our old roles. Jermaine is a full adult now. I expected great things from him and the other kids from the show, but sharing the screen with him felt good. We had a great time.”

Adding to the reunion was actress Maria Bloom. Fans of The Wire might remember her as Councilwoman Marla Daniels. On We Own This City, she was Mrs. Green, a nosy and well-intentioned neighbor who didn’t trust the police.

“There’s nothing wrong with amplifying talent in your material,” Hector says of Simon’s uncanny ability to reward fans with familiar faces and Easter eggs from The Wire. “It’s smart casting. One of the best feelings is walking into a room, and saying, ‘It’s you.’ It’s even more fun being able to be on the other side on another show.” 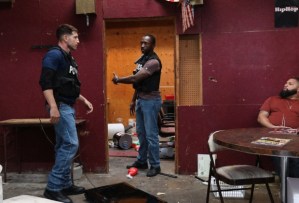 Best of all, returning to the Simon universe in another Baltimore-set series has given Hector the opportunity to play off actors he hasn’t worked with in the past, including Jon Bernthal, who stars as corrupt Sergeant Wayne Jenkins.

“Jon is amazing,” Hector reveals. “We would sit down and work out the scenes and really chop it up. I was able to really respond to what he gave. That’s when things tend to happen. You get lost in the moment, and the scene really comes to life. We got to do something great, and it was exciting. His energy is pure of heart. He’s a good dude, and it feels good to be around folks like that.”

Did you enjoy seeing We Own This City’s reunion for former stars of The Wire? Are you hoping to see more of that? Drop your thoughts in the comments.