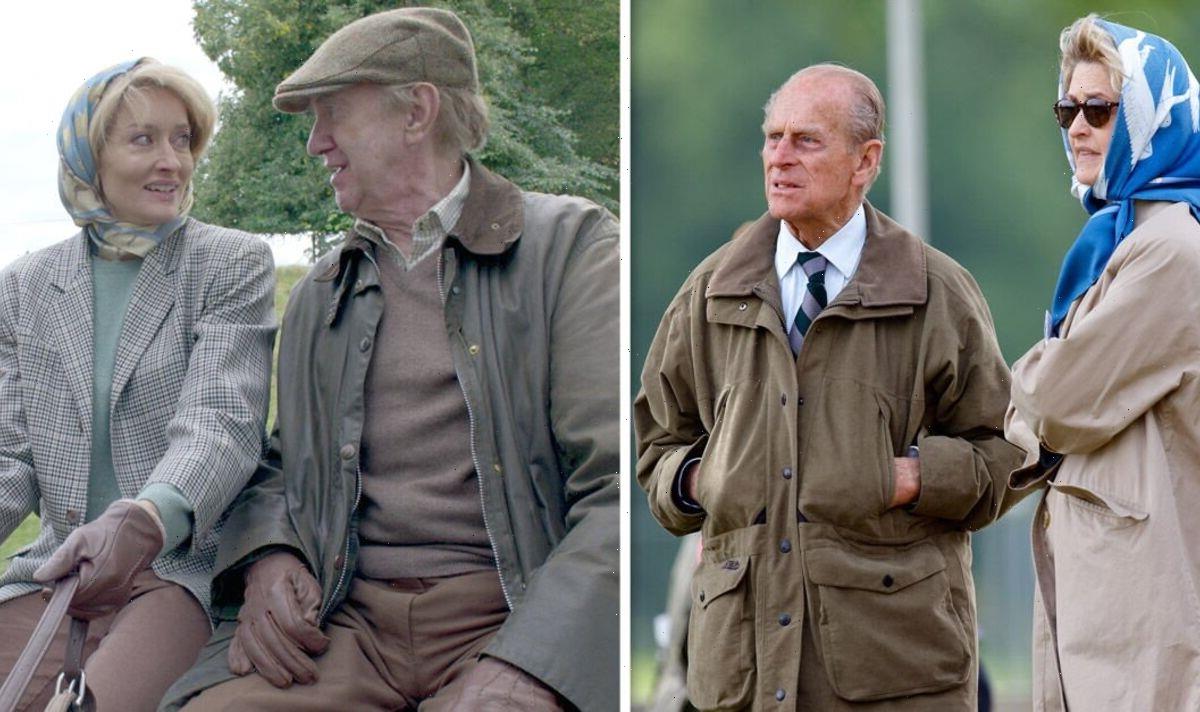 Season five of The Crown depicts the friendship between the Duke of Edinburgh (played by Jonathan Pryce) and Penelope Knatchbull (Natascha McElhone). They found a shared passion in carriage racing. Penny became interested in carriage riding following the tragic death of her young daughter Leonora (Clara Graham), who died at the age of five in 1991 after suffering from kidney cancer. Penny’s new hobby helped her with the grief as she devoted herself to the sport.

In the show, the two characters spent a great deal of time together with Prince Philip even helping to restore a dilapidated carriage for her.

Later, in the series, Prince Philip told the Queen (Imelda Staunton) to acknowledge his new companion despite her chagrin.

In the scene, the Queen wasn’t impressed with Philip’s request but carried it out nonetheless, telling Penny she didn’t want rumours to start in a subsequent scene.

Penny and the Queen were later seen having a tense conversation in the study about the demise of the Russian Imperial Family and why the Windsors didn’t come to their aid.

What really happened between Penelope Knatchbull and Philip?

Acclaimed author and historian Marlene Koenig said of the relationship between Penny and Prince Philip: “This was family. Norton was Louis Mountbatten’s grandson. Philip was his godfather.

“He was godfather to William. He and Charles were at Gordonstoun together although one year apart and Penny go into carriage riding.

“She and Philip have never had an affair. Men have women friends and she’s been very much embraced because her husband years later ran off, had a brief affair and then came crawling back and became very ill. Penny’s been running Broadlands.”

She went on to say: “They’re close. They’re friends. The Queen is included, even invited Penny to spend weekends to do things.

“Sometimes the press creates fake things to get stories started, ‘Oh they had an affair.’ No they didn’t.

“They were good friends and good late Queen understood this, that he had friends who were women. It doesn’t mean he slept with them.”

She added: “He certainly wasn’t going to sleep with the wife of his first cousin’s son and also the godfather of Prince William.”

Penny has been considered a trusted friend to the Royal Family with Queen Elizabeth II even reportedly calling on her a number of times, including convincing Prince Philip to give up his driving licence following an accident.

Philip and Penny are said to have first met when she was dating her husband-to-be aged 20. She was 32 years younger than the Duke of Edinburgh.

Unlike her husband, Penny was the daughter of a wealthy butcher and businessman Reginald Eastwood who founded the Angus Steakhouse restaurant chain.

She had a business degree from the London School of Economics after being educated in Switzerland.

Penny and Norton got married in 1979 with the couple postponing their wedding following the assassination of Lord Mountbatten by the IRA the same year.

In 2010, Norton left his 31-year marriage to Penny to be with his lover and fashion design Eugenie Nuttall in the Bahamas.

Penny ran Broadlands by herself and continued on stoically with Norton later returning in 2014 after his romance didn’t last.

The Crown season 5 is streaming on Netflix