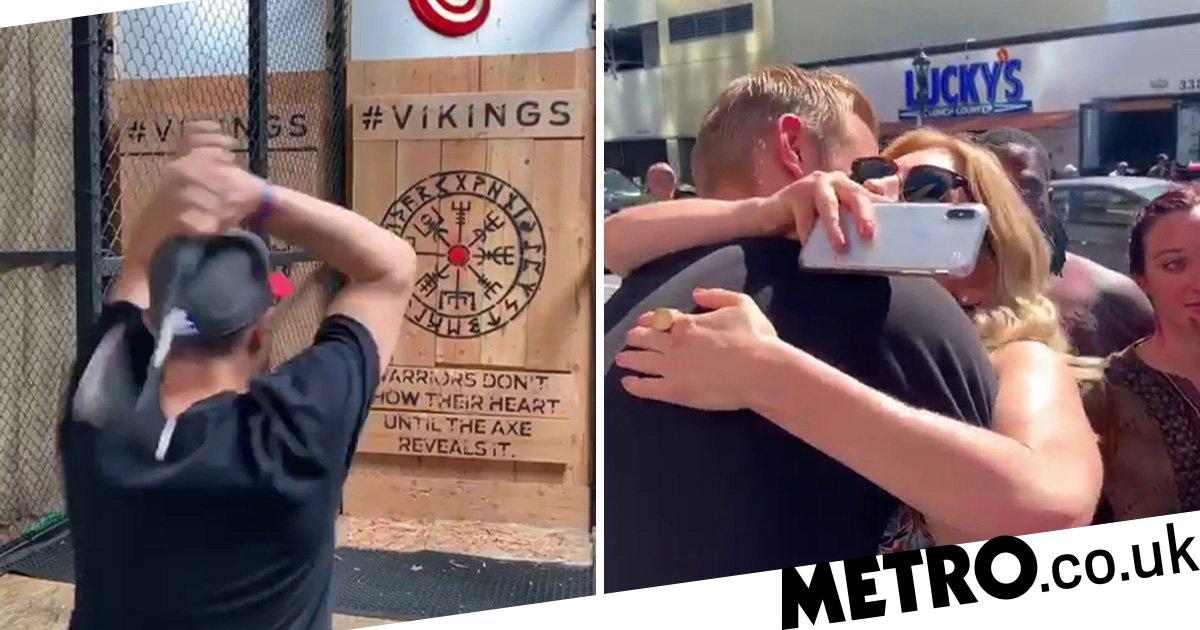 Vikings stars Katheryn Winnick and Alexander Ludwig have given us the reunion of our dreams at the San Diego Comic Con.

Yes, on Saturday afternoon, the pair made an appearance at the star-studded convention where they challenged each other to some axe throwing.

It looked so much fun.

Taking to his Instagram account, the Bjorn star shared his attempt and ended up hitting the bullseye, making it seem so easy!

We say beginner’s luck – or maybe it’s all that vikings training he’s had.

Before heading to the event, the Lagertha actress also took to Instagram where she trolled her co-star in her stories.

While getting her hair and makeup done, the 41-year-old beamed down the lens: ‘Hey Comic Con!

‘Alexander Ludwig, you have been a very bad son. You have not been calling your mum on a regular basis.’

She laughed: ‘I will see everyone at the Vikings booth in just a few minutes, bye!’

Videos later emerged of the actors finally meeting up as they embraced outside of the venue.

Fans could be heard in the background cheering along as their favourite Nordics were finally back together again.

This isn’t the first time the duo have given us all the feels, as Katheryn recently joined Vikings star and Alexander’s girlfriend Kristy Dawn Dinsmore’s Bite The Bullet campaign.

Earlier this year, Alexander opened up about his battle against addiction in a video supporting the project.

The company aim to give a voice to those who have been through hardships, and to help them ‘bite the bullet’ and talk about their experience.

And now his onscreen mum is throwing her support behind the actor, as she has joined in with her own message.

Championing the actress, the 26-year-old wrote to his two million followers: ‘Katheryn Winnick you are an inspiration, thank you for supporting a great cause #bitethebullet.’

Vikings is set to return to Amazon Prime and the History Channel later this year.