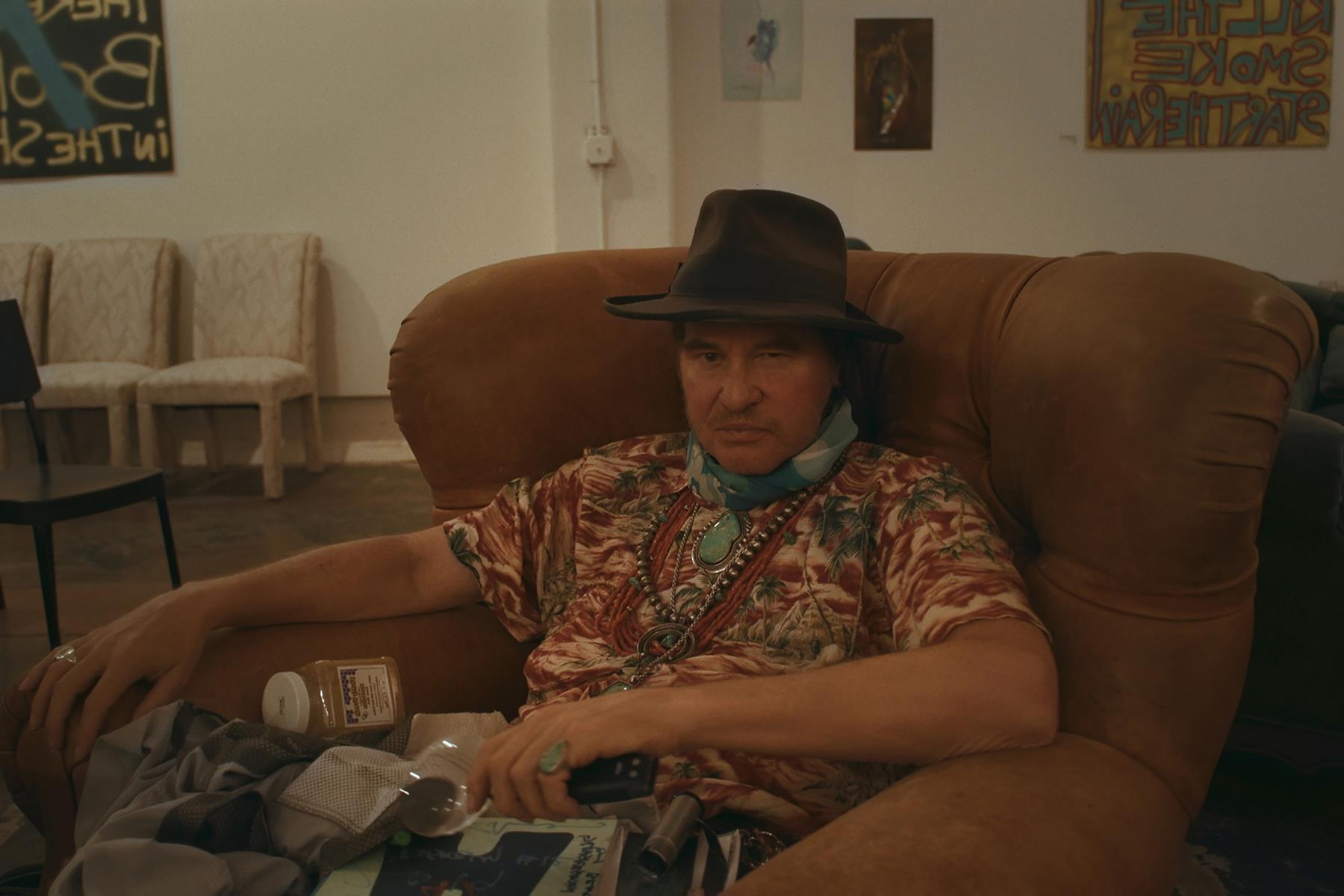 We have missed you, Val Kilmer.

Oh, we still go back to his old movies, where he continues to fly ice-cold (no mistakes) in an F-14, keep all his Pacific Tech University dorm room’s filth in alphabetical order, trade machine-gun fire with the LAPD while rocking a trim gray suit, say he’s our huckleberry. Kilmer’s just been slightly out of the picture(s) for a while, sidelined screen-career–wise by a throat cancer diagnosis in 2017 that’s left him speaking through an electronic voice box. He’s written a memoir, concentrated on healing, occasionally made fan-convention appearances, set up a gallery space in Los Angeles that doubles as a “sandbox” for actors and artists. And he began going through his vast archives of home movies and on-set videos he’d shot over the last five-plus decades. Kilmer had shot Super 8 films with his brothers when they were growing up and continued to carry a video camera around him constantly, long after he became famous. Thousands of hours of visual autobiography were just waiting to have the dust blown off.

Val, the documentary assembled from his old footage and buffered by lots of present-day misadventures with Kilmer (it premieres on Amazon Prime today), credits Ting Poo and Leo Scott as its directors. There is, however, only one real author here. A loosely curated, lovingly slapped together scrapbook, the film is Val’s personal testament of a creative life — one largely lived not just in front of lens but, in his own words, “within the illusion” of performances. It’s sentimental, as obscuring as it is revealing, occasionally indulgent, offhandedly brilliant in spots and filled with oddball detours and self-regarding tangents. A perfect compliment to, and mirroring of Kilmer’s career, in other words.

Just don’t call it a eulogy. Val is simply the reflections of an actor with a knack for self-documentation, who has seen better days but remains buoyant by the prospect of making art in one form or another. We get a glimpse of his childhood in Chadworth, California, where Val and his two brothers grew up making their lo-fi versions of blockbusters (who needs Jaws when you the Kilmer kids’ counterpart, “Teeth”), before a tragedy scars the family. Val gets bitten by the acting bug and becomes the youngest kid accepted to Julliard. He gets cast in some plays, including one with a baby-faced Kevin Bacon and an ever-babier-faced Sean Penn, and then a few movies. Kilmer is ambivalent about taking the role in the “warmongering” Top Gun, but gets seduced by Tony Scott’s style and the sheer whoosh of it all. More parts, from sexy dead rock stars to caped crusaders, come his way. He gets married, has kids. The A-list beckons.

It is, in many ways, a standard actor’s journey from young theater zealot to working thespian, movie star to “difficult” movie star. There are Acting 101 maxims, Shakespeare quotes and clichés regarding the nuts and bolts of craft galore, some of which are read from Kilmer’s 2020 book I’m Your Huckleberry by his son, Jack. We get a peek at the madness behind his Method in playing Jim Morrison, and snippets of his audition tapes for Full Metal Jacket and Goodfellas. Val recounts how being cast as Batman was a dream came true, only to find that the suit prevented him from expressing anything in less than “soap opera” histrionics, or being able to hear much of anything, or take a very deep breath — as perfect a metaphor for the Hollywood franchise machine as you’re apt to find. When we get to the infamously doomed Island of Dr. Moreau shoot, where Kilmer finally gets to act beside his hero Marlon Brando, viewers get a ringside seat as the actor and replacement director John Frankenheimer fight to see who can be the bigger pain in the ass. The fight ends in a draw.

Such all-access moments are lovely, and if you’re coming to Val simply for behind-the-scene anecdotes and some dish, you’ll get a semi-decent fix. Yet the recent footage of him is a key ingredient, and adds some intriguing present-tense notes to the nostalgia mix; it also somehow avoids treating a still recuperating Kilmer like either a walking car wreck or a saintly survivor. Regrets — he has a few dozen. He mourns the fact that his pet project about Mark Twain, and his one-man show Citizen Twain, were cut short by sickness. He wishes aloud that he could talk without a mechanical aid. But Val is still standing, and still meeting his public when he can, and still affectionately palling around with his son and his daughter, Mercedes. This could have been his equivalent of Johnny Cash’s “Hurt” music video, where the Man in Black reckons with his younger self and serenely awaits divine forgiveness. It’s nowhere near that funereal. Kilmer is still having too much fun.

But what Val does is remind you of the relationship moviegoers have to the people they watch onscreen. There’s more than one memory-lane trip happening here, and to see Kilmer still mugging for the camera, still displaying the sort of spirit for which the word “puckish” applies, is to remember what it was like to spend years’ worth of time with him in the dark. Not just the highlight roles — your Iceman, your Jim Morrison, your Doc Holliday — but the whole enchilada of his filmography. And even though you get all the Kilmermania you can handle in this self-portrait-with-benefits, you also feel the loss of not having witnessed the wild, weird, WTF-dude? stuff we’ve been robbed of, temporarily or otherwise, over the last handful of years. His choices may have confounded you or left you breathless, but you were never, ever bored by his performances, even if the movies they’re taking place in were D.O.A. You were always compelled to watch Kilmer, always willing to try tuning in to his wavelength. As the documentary demonstrates, that feeling hasn’t gone away at all.