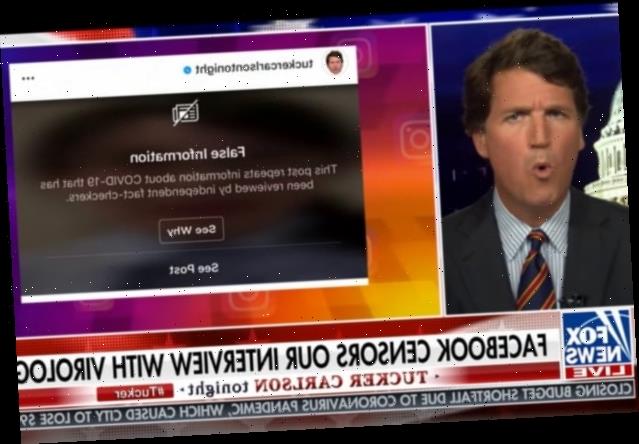 On Tuesday, Tucker Carlson had a guest on his Fox News show who claimed that COVID-19 was developed in a Chinese lab and released intentionally by the Chinese government, which is not true. And after Facecbook and Instagram slapped a fact-check warning on the clip of the interview, Tucker spent the first 20 minutes of his show Wednesday night being upset about it.

“Facebook suppressed the video, presumably on behalf of the Chinese government,” Tucker said, providing no evidence for that outlandish supposition. “Facebook executives have made it harder for users to watch our segment. Those who found the video had to navigate a warning the interview ‘repeats information about COVID-19 that independent fact checkers say is false.’ Instagram, which Facebook also owns, did the same thing.

“Twitter suspended Dr. Yang’s account entirely. It did not explain why. Nor do the tech companies explain how they would know more about disease transmission than an MD PhD virologist like Dr Li-Meng Yan. Instead, Facebook and Instagram linked to three so-called fact checks that supposedly proved Yang was lying.”

The fact check warning is not, contrary to Tucker’s claim, difficult to “navigate.” Users can simply click the “see video” button to watch it. The video is freely available on Facebook for anyone to watch if they want to. It has not been censored. But that didn’t stop Tucker going on and on like this for a while.

“But if you click on the provided links you noticed something odd. The fact checks were all published months ago, many months, in January, February and March,” Tucker said, even though something that was true in January can still be true now. “And they had nothing whatsoever to do with what Dr. Li-Meng Yan said on our show. They were written before in fact anyone knew who she was.

“One of the fact checks attacks a completely unrelated claim the virus was patented in the vaccine was prepared and ready to go. What does that have to do with the interview that we did last night? No one will tell us that.”

The three fact checks (which you can read here, here, and here) are all debunking various false conspiracy theories about COVID-19 being man-made. Since Dr. Li-Meng Yan claimed the virus was man-made, all three of those fact checks are relevant.

“The truth is, and you know what if you’ve watched carefully, experts have been wrong frequently throughout this pandemic. At one point, they told us not to wear masks. Now they tell us we must and so on. They’ve changed their prescriptions many times,” Carlson complained.

“Most things are not bad people. Most of them are trying their best. But they’re human beings and therefore their fallible. They make mistakes. The solution to this age old problem, and we used to understand this intuitively, is more informed voices in the conversation. That’s how you make wise decisions, that’s how you get to the truth. Diversity of view.”

But Facebook, Tucker says, doesn’t like that idea, even though they are allowing the clip to remain on their platform.

“Facebook doesn’t believe this. They believe in censorship,” Carlson said, even though they did not censor the video. “Censorship does not make us wiser, it does not make us better informed. If it did, we’ve been speaking Russian right now — the Soviet Union would run the world. It would have worked. But instead the Soviet Union is extinct. It collapsed under the weight of its own absurdities. Absurdities abetted by censorship.”

And then Tucker took a strange leap.

“And that’s the most basic lesson of dictatorships, all of them. Anything built on lies falls apart over time. Unfortunately, dictators never see it that way. Dictators care about power. Anything that stands in the way of their power must be crushed.”

It’s not clear what dictatorship Tucker is complaining about here. Donald Trump, who Carlson supports, is currently president of the United States.

You can watch the quoted portion of Wednesday’s episode of “Tucker Carlson Tonight” in the video embedded in this article.