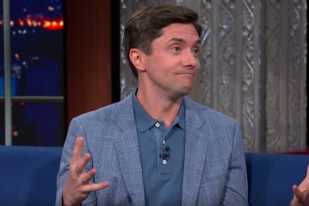 That ’80s movie. Topher Grace guested on Stephen Colbert’s “Late Show” Thursday, when he revealed the one impression he can do: Marty McFly (Michael J. Fox) in “Back to the Future.”

Soon, you’ll be admitting that the impersonation is much better than you thought — and possibly before Grace even speaks.

Watch the video above.

Grace, who portrayed David Duke in Spike Lee’s “BlacKkKlansman,” dropped by the CBS late-night program kinda-sorta to promote his “Black Mirror: Smithereens” episode, which has been out for a while now. The “That ’70s Show” star also plugged his podcast, “Minor Adventures With Topher Grace,” and told Colbert that he’s been re-editing movies for fun, including the “Hobbit” trilogy.

Colbert’s ears perked up at that one, as he appears — briefly — in 2013’s “The Desolation of Smaug.” Rather, we should say, he *appeared* in it — in the actual final cut.

When asked if he made Grace’s just-for-fun edit, the amateur Avid machine user stalled for time.

“Is it still in your f—ing movie or not?” Colbert pressed.

“I’m so sorry, I’m so sorry,” Grace responded, “We had to cut it. I’m so sorry. Here’s what happened, Stephen: When you get in the editing room, and you have all these choices.”

“That’s all we have time for, Topher, I’m afraid,” Colbert countered.