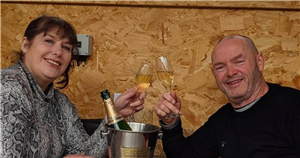 It might be raining out, but Gogglebox's Malone family have clearly got that Friday feeling.

The telly regulars poured themselves a glass of bubbly as they sat outdoors in Covid safe drinking environment, sharing a cheers against a plywood backdrop.

Known for their elaborate snack displays on the Channel 4 show, this time it was champagne, with lorry driver Tom Sr and his wife Julie writing: "Happy Friday ! See you tonight C4 9pmxx"

The Malones have been popular with viewers ever since they first appeared on the hit show back in 2014 for the fourth series.

They star alongside son Shaun, although dancer son Tom Jr has retired from TV and now has a huge following on social media as an influencer, with 792,000 TikTok followers.

Announcing the decision earlier this year the 26 year old explained: "So after 6 and a half years it’s finally time to put down the remote, and to say goodbye to Gogglebox.”

He continued: "I've loved every minute and I’m eternally grateful to @channel4 and @studiolambert for allowing me to be a part of the show. But new opportunities are knocking on the door and it’s time to explore them."

Tom and Shaun are not the only Malone siblings. They also have brother Lee, who runs a recruitment firm and recently married. The family is completed by sister Vanessa.

While Lee and Vanessa have opted to only rarely join the family's hilariously frank run downs of the week's TV, making an appearance are the Manchester family's beloved Rottweilers Dave, Lucy, Izzy and Joe.

Recently Tom Jr revealed that he and girlfriend Bryony Briscoe have endured racist abuse due to their interracial relationship.

He said the negative comments can get "overwhelming".

"At the start of the lockdown last year, obviously the George Floyd situation happened and we were both very vocal about Black Lives Matter," he told The Sun earlier this week.

"For people who were obviously opposed to that, their easiest way to hit back at what we stood for and target the fact that she’s obviously mixed race and has heritage on both sides.