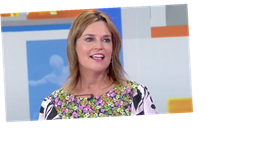 During Monday’s episode of Today Savannah Guthrie shared the news that she will be undergoing another eye surgery. After suffering from a retina detachment last year, she will now have a cataract removed.

On the morning show, Guthrie signed off early and told her co-hosts Carson Daly and Hoda Kotb that she is getting surgery to help a blurry spot in her vision since her retina surgery. The injury was a result of her son accidentally hitting her in the eye with a toy train. She said it is common for people who have had retina detachment surgery to develop cataracts.

“It’s been a long time, I’m super excited,” said Guthrie. “I feel like it’s Christmas morning because if they remove this cataract I’ll really be able to see, and I’ve had a hard time seeing.”

Her vision has been distorted and Kotb pointed out that Guthrie had been reading her notes very up close as of late. “Hopefully next time I see you I’ll really see you!” Guthrie told her co-hosts.

Guthrie will not be on Tuesday’s episode of Today but she said she is expecting to return later in the week.

Guthrie posted a photo of her son Charley playing the board game Operation on Twitter with the caption: “Headed off for cataract surgery! This was an expected complication after retina detachment. Very hopeful to be seeing [100%] and back at work this week!”

Watch the video of her announcing her surgery below.