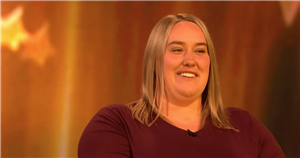 Tipping Point fans have been left in disbelief as an underdog contestant won the show's jackpot counter.

Monday's episode (May 23) of the ITV quiz show saw Claudia beat out her competitors Anssi and Alison to get to the final round.

With the £10,000 jackpot counter up for grabs, Claudia managed to correctly answer every question in the final round to successfully knock down the jackpot counter.

After a wobbly start, she even almost took home a whopping £20k as she was inches from also sinking the double counter, which would have saw her prize pot doubled.

One fan wrote: "Congratulations to Claudia. I thought she was going to come out empty handed but counter 18/18 got her the jackpot. You love to see it."

Another commented: "Best ending ever #tippingpoint love it when people get the 10K."

A fourth amazed fan replied: "Well done Claudia, you deserved it by getting all the questions correct and three counters all the time."

A fifth viewer concluded: "I honestly didn't think that 10K counter would go. I’m so happy it did."

Following her win, Claudia said: "Wow. I can't believe it.

She was then asked by Tipping Point host Ben Shephard how she planned to spend her winnings.

Claudia confirmed she would spend some of her money on taking a trip to America with her boyfriend Nathan and later teased that some of the money would go towards the couple's wedding – despite them not yet being engaged.

She hilariously added: "Nathan will kill me for saying but I'm going to put some towards a wedding – but I'm not engaged."

Ben replied: "Wow. So is that you proposing to Nathan?"

Claudia cheekily responded: "That's me giving him the big prod."

Tipping Point airs at 4pm on weekdays on ITV.