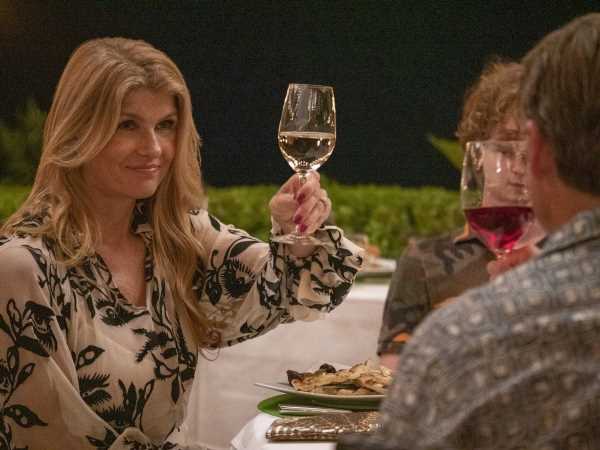 HBO’s limited series, The White Lotus, comes to a close with episode 6, “Departures.” Viewers finally find out who dies during the luxurious Hawaiian vacation, and it was someone they suspected in fan theories. Rachel (Alexandra Daddario) and Shane Patton’s (Jake Lacy) marriage continues to fall apart. However, a tragedy pulls them back together by the end, similar to Mark (Steve Zahn) and Nicole Mossbacher (Connie Britton). The wealthy people continue in their oblivious, ignorant ways, unphased.

Quinn Mossbacher (Fred Hechinger) wakes up from his last night of sleep on the beach, and the Native Islanders yell, “C’mon, brother, we need you.” He jumps on the Hokulea (a voyaging canoe) again. Later he tells his parents that he’s not going home. The Hokulea team needs a sixth teammate. He plans to finish school online, but Mark and Nicole brush off his idea.

Later, at dinner, Quinn insists that he’s staying because everything is dead at home. Mark suggests that they buy a boat instead. However, nothing Quinn’s family said made a difference. The next day, Quinn waves his family onto the plane, and as soon as they disappear, he runs out of the line and back to Hawaii. Viewers see Quinn rowing with the native islanders — the only guest who appreciated all that the island had to offer.

The newlyweds: Rachel and Shane

When The White Lotus Episode 6 opens on the newlyweds, Rachel tells her new husband that she booked a facial so she can’t make it to breakfast with him. In the spa, she cries as Belinda caters to her. Rachel asks the spa manager if any rooms are available that night. Belinda sweetly gives Rachel her card and tells her to call if she needs anything.

When Rachel returns, Shane talks to his travel agent, Lorenzo, about the “jewel thief.” The Mossbachers told him about the robbery at breakfast, so he decided to keep the pineapple knife by the bed. Rachel finally admits that she made a mistake marrying him, and the man starts laughing. Shane tells her that he had no idea that she was an “insecure, naive baby.”

Rachel tells Shane he’s the baby that’s coddled and throws never-ending tantrums on his honeymoon. Instead of trying to win back his wife, he tells Rachel that they are heading “down a very dark road.” He heads out for a swim, not caring about his wife’s feelings.

At dinner that evening, Shane insists that he’s there for Rachel and loves her. In the next moment, he tells her that she’s ruining everything, slamming his fists down on the table. He cannot fathom why Rachel wouldn’t want to be with him. She says she feels “weirdly alone” being with him. So, he gets pissed off and leaves dinner, “Then be alone.”

In The White Lotus Episode 6, Olivia (Sydney Sweeney) and Paula (Brittany O’Grady) hear Mark and Nicole having sex. Olivia cringes. Having bonded over Mark’s rescue, Mark and Nicole make love. Nicole looks at him in a whole different light after he tackled the masked robber (Kai).

After breakfast, Armond (Murray Bartlett) tells the Mossbachers that the police recovered the stolen items. Olivia insists on knowing who the robber was, and Armond couldn’t believe it was Kai because he was such a great employee. Later, on the boat, Paula begins puking. Nicole makes Olivia hold back her friend’s hair. Then, Paula sits on the side of the boat, distraught over what happened to Kai. She drops the necklace he made her in the ocean in a very Titanic way. Mark and Quinn finally go scuba diving, and the scenes are nothing like network television.

Back in the Mossbacher suite, the family gets ready for their last dinner on vacation. Olivia confronts Paula about giving Kai the code to the safe. Paula tells Olivia that she is just like her parents.

Olivia cries that her mother could have gotten hurt, but Paula counters that something terrible did happen. Olivia goes into her mother’s room to cry, and Nicole hugs her. However, after dinner, in bed, Olivia cuddles up to Paula and cries in Olivia’s arms, worried about how much she messed everything up.

In The White Lotus Episode 6, Tanya wakes up to Greg. He tells her that she was “on fire” last night. Greg busts into another one of his coughing fits. Later, she suggests that they rent a house in Aspen and Greg agrees to “keep the party going.”

Later, Tanya goes to check in on Belinda. She tells her that she and Greg are heading to Honolulu together tomorrow and then Aspen. Tanya calls her friendship with Belinda “a transactional relationship” and gives her a wad of cash. As viewers thought, Tanya’s wellness center plan never happens.

At the bar, Greg has another coughing fit while having drinks with Tanya. He finally tells her about his health issues — “Don’t be surprised if I just suddenly drop dead.” Tanya accepts what he says, embracing that she has tried everything else; why not immerse herself in death.

Later, Belinda tosses her business plan in the trash. Rachel calls her for a new room. Belinda listens as Rachel tells her every detail about her internal struggle in the new suite. When she asks Belinda for advice, the spa manager says she’s all out. The following day, Tanya finally spreads her mother’s ashes in the ocean.

At the front desk, Armond gets a call regarding Shane’s complaints. After the call, Armond reveals to Belinda that he’s fired. So, he directs Dillon to come to his office and “go hard.” The two men get high before the evening dinner service. After dinner, Armond returns to his office to do more drugs and drink with Dillon and Hutch. They snort, drink, dance and party, taking every kind of drug available.

After getting wrecked, Armond begins to think about the wrath of Shane. He decides to enact revenge; heads to Shane and Rachel’s Pineapple suite and poops in his suitcase. HBO shows the entire thing, poop and all. As he’s peeing in the suitcase, Shane returns to his suite, so Armond hides in the closet.

Shane finds the “turd in his room” and calls the front desk to complain. Then Shane hears someone in his suite, finds the man, and stabs him with a knife. The resort manager falls into the soaking tub and dies, similar to what fans predicted. Later, the police come, but Shane isn’t arrested or taken to the station for questioning.

‘The White Lotus’ Episode 6 recap: ‘Departures’ and a new round of arrivals

On the last day of the vacation, viewers are back where The White Lotus Episode 1 began. Shane is in the airport; he didn’t suffer any repercussions for stabbing someone. Rachel walks in, and Shane heads over to talk to her. She claims she’s happy, and apparently, the couple stays married.

Meanwhile, Nicole smiles now that she got her bracelets back and her relationship with Mark is reignited. Olivia and Paula again read with their books up high.

Tragically, Belinda stands with her co-workers and a new resort manager to greet the incoming guests and start all over again.

All six episodes of The White Lotus are available for streaming on HBO and HBO Max.