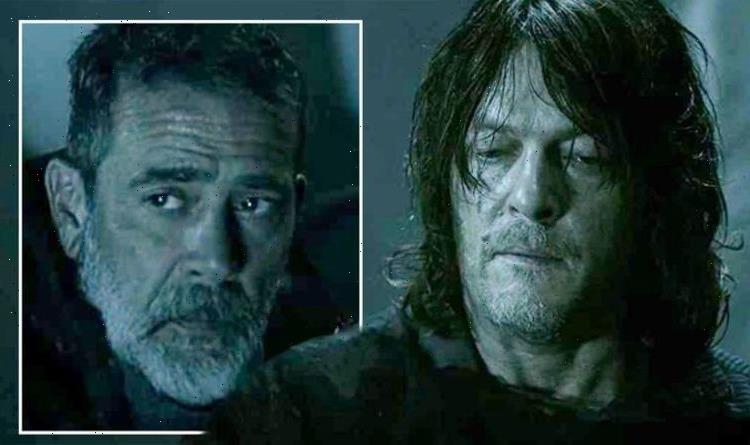 The 11th and final season of The Walking Dead got off to an action-packed and spine-tingling start with Daryl (played by Norman Reedus), Maggie (Lauren Cohan) and the rest of the group of survivors finally coming face to face with murderous new enemies, The Reapers. The journey itself to get to the new antagonists of the AMC drama wasn’t without challenges and action of its own, however, as Daryl and co struggled to make it out of the abandoned subway station they trawled through alive. And while it was youngster Gage (Jackson Pace) who died in the tunnels, Negan (Jeffrey Dean Morgan) had tried his best to ensure it was Maggie.

Now, actor Reedus has dropped a huge clue to suggest Daryl may not be as understanding as Maggie and her team were when they discovered Negan had left her for dead.

To recap, Maggie and a small group of her followers from a separate camp have reunited with Daryl and Carol (Melissa McBride) and have allied forces in their attempts to return to a safe civilization.

However, Maggie has continued to struggle to see Negan – the man who killed her husband Glenn (Steven Yeun) – walking free as an established member of the Alexandria group.

In the season 11 premiere, Maggie even warned Negan to “keep pushing” her as she held a gun to his head after the pair clashed about the safest and best way to get everyone to safety and out of the subway.

Negan isn’t convinced Maggie is on board with tolerating him as part of the group and even called the TWD stalwart out for wanting to kill him all along.

So in the final moments of the TWD season 11 premiere, Negan spotted the perfect chance to take Maggie out of the picture and keep himself safe from the threat of her seeking vengeance.

As a hoard of Walkers approached the team, each one had to clamber over a disused carriage blocking the tunnel’s way of escape.

Maggie did her best to claw up the side of one of the carriage but with Walkers nibbling at her heels, she struggled to keep climbing and maintain balance.

And who happened to be the only survivor close enough to help her onto the roof of the carriage? Negan.

He walked away, and the first episode of the series ended with Maggie plummeting into a pile of Walkers and into almost certain death.

However, she miraculously made it onboard the train in episode two and told everyone about what Negan had done – prompting more than a few angry words being pelted his way.

Maggie, however, didn’t seek to kill Negan as a result – although Reedus has admitted it would’ve been different if Daryl wasn’t AWOL exploring other avenues of escape.

“He would have slit his throat,” Reedus told Entertainment Weekly when asked about how Daryl would-be reacted if he’d been there.

“Hands down, he’d be dead,” he added – so could Daryl’s anger still come to the forefront when he does find out?

Daryl had already punched Negan in his altercation with Maggie and has made no secret about the disdain he has for the former Saviour.

With Reedus convinced Daryl would’ve killed Negan if he were there, surely it wouldn’t take much more for him to cross the line once more.

If Daryl is there for more Maggie and Negan rows, could he be the one to intervene and “slit the throat” of the former villain?

Or will Daryl need Negan to combat the imminent threat of the Reapers?

Whatever happens, it looks like danger will be behind every door Negan approaches.

The Walking Dead season 11 airs Sundays in the USA on AMC and the following day on Star via Disney+ in the UK.