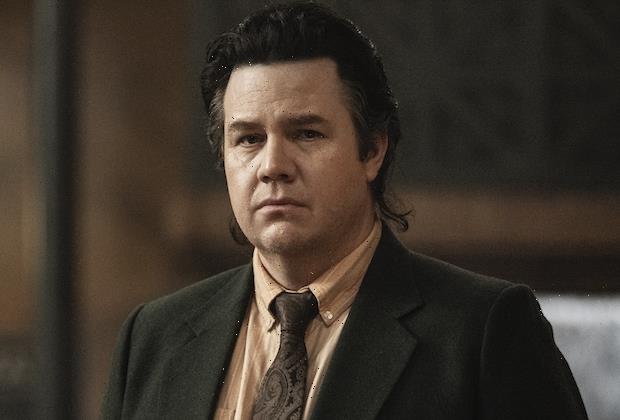 If you’ve been waiting, endlessly waiting, for The Walking Dead to start feeling in its final season like it was really building to something, your patience was at last rewarded in Sunday’s “Faith.” Or at least it started to seem like it was going to be rewarded.

As Eugene’s mockery of a trial for Sebastian’s “murder” neared its inevitable conclusion, with Pamela going so far as to claim that the recording of her beloved son had been doctored (as if), Yumiko threw a Hail Mary pass by appealing to Mercer to take the stand and out the governor for the lying liar that she is. That would be a hard pass, he said — this, despite knowing that Princess was now Pamela’s prisoner! 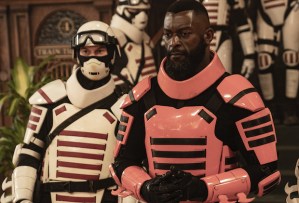 Ultimately, Eugene was — shock — found guilty and sentenced to be executed within the hour. But when he was taken for what he thought was going to be his final walk, it led to… Mercer. Was Max’s brother going to kill her boyfriend? Nope. He was on our side, it turned out. “Time to f–k s–t up,” he said. Let’s go!

IN OTHER DEVELOPMENTS | En route to Oceanside, Aaron, Jerry, Lydia and Elijah bumped into Luke and Jules — remember them… vaguely? The sweethearts reported that Commonwealth troopers had overtaken the beach community, so no point in going there. When still more troopers approached the sextet, Lydia kept her friends safe by having them pull a Whisperers and roam among the dead. Well, safe-ish. One of the walkers was that newfangled smart kind; it picked up a dropped knife… but to plunge into whom?

Meanwhile, a kerfuffle with a guard at the Commonwealth worksite left Negan’s telltale map in the possession of the warden, who tasked him with finding out whose it was. Though Annie’s husband, eager to be executed and martyred, confessed that it was his, the warden pulled a fast one and decided to kill the expectant mother instead. “You will feel this punishment,” he roared. 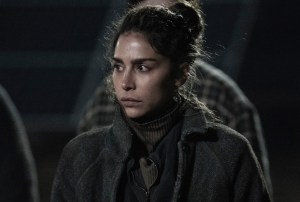 Thankfully, Ezekiel, Magna, Princess, lotsa prisoners moved to stand in front of the warden’s would-be victim. “Shoot them all,” the villain hollered at his guards. They did not. In fact, one, still ticked that he’d been denied a transfer to be with his brother as he died — how’s that for dense plotting? — took aim at the warden. In turn, he grabbed Kelly.

In the end, Daryl, Connie, Carol, Maggie, Rosita and Gabriel arrived on the scene in time to keep any of our series regulars from being harmed. But where was Coco? Maggie had rescued Hershel, but Rosita’s baby girl was nowhere to be found. When Rosita threatened the warden with having his face chewed off by a walker, he still wouldn’t reveal the youngster’s whereabouts. “You will lose everything,” he hissed. So she let the reanimated trooper chow down on his eyeball.

So, were you sorry the Negan spinoff had been announced before he was nearly executed? Were you ever worried that Eugene would die? And how long had Hershel been tied up? Comment away.