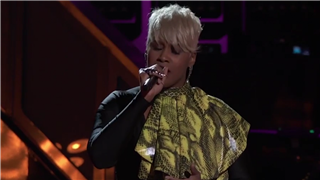 The Voice’s top 17 artists of season 20 took the stage for their first live performances on Monday, and Team Legend’s Pia Renee absolutely brought it!

The 37-year-old Chicago native — who earned Whitney Houston comparisons from the coaches and Mega Mentor Snoop Dogg throughout the Battle and Knockout Rounds — wowed with her stunning rendition of Jazmine Sullivan’s “Need U Bad,” from her otherworldly vocals to her stunning red dress.

Blake Shelton called Pia’s performance the best Team Legend performance of the night so far, and her coach, John Legend, agreed that he was constantly impressed by the talented vocalist.

“I love seeing you fully blossom out here on stage,” he shared. “I always tell you, you do not rehearse your best. You’re very chill, and figuring it out still, but when you come out on stage, you just give everything. The outfit, the energy, the runs, the high notes, it was incredible!”

In addition to their coaches, the season 20 contestants have also had the help of their Mega Mentor: rap legend Snoop Dogg! ET spoke with Snoop while he worked with singers during the Knockout rounds, and the legendary rapper shared how excited he was to help coach the teams and impart his own experiences on the up-and-coming stars. But, while he had thoughts on each of the season 20 coaches, Snoop wasn’t playing favorites!

“It’s hard to say which team that I like working with the best, because there’s so much talent inside of each team,” he marveled. “Each team has some unique singers and some unique artists that could possibly make it past the show. I know only one person’s gonna win, but it seems like there’s about six or seven record deals up in here.”

The Voice airs Mondays and Tuesdays at 8 p.m. PT/ET on NBC. See more from season 20 in the video below!