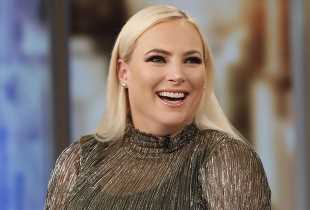 In the wake of a recent report that Meghan McCain is considering leaving The View, the show is (kinda-sorta) denying rumors of the co-host’s possible exit.

“The co-hosts and The View have had an incredible season, and we expect them all back for an epic year ahead,” a spokesperson for the ABC chatfest said in a statement to TVLine.

The response comes on the heels of Wednesday’s Daily Beast report, in which sources said McCain may leave the show ahead of Season 23. One source said McCain is “feeling like a caged animal” at the daytime talker, while another described her as “exhausted and defeated” after her two seasons on the show.

McCain has served as a conservative voice at The View‘s Hot Topics table since 2017, where she has frequently clashed with her fellow co-hosts, particularly Joy Behar. During an April episode, McCain talked over Behar during a discussion of the immigration crisis, and when Behar pointed out that she had let McCain say her piece without interruption, McCain scoffed and fired back, “Yeah, well, part of your job is to listen to me,” which drew significant criticism of McCain on social media.

Hilary Estey McLoughlin, an executive producer for The View, told The Daily Beast that “I think [McCain] does want to be there,” adding that she believes the co-host “will come back” for Season 23.

The View‘s co-hosts currently include McCain, Behar, Sunny Hostin, Whoopi Goldberg and Abby Huntsman (who is away on maternity leave). A premiere date for Season 23 has not yet been announced.