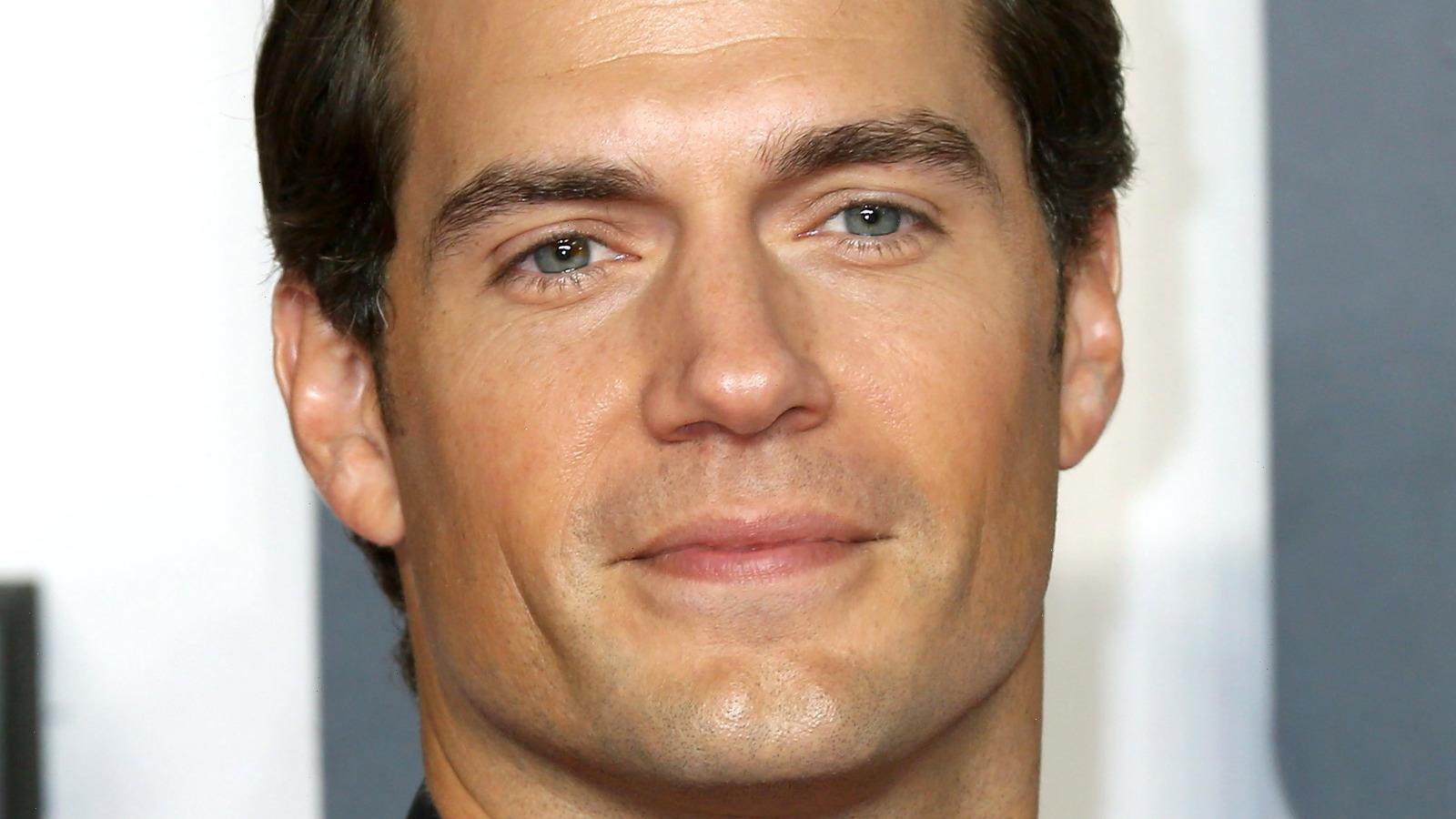 Henry Cavill is certainly making the most of his success these days. You have likely seen him (and possibly swooned over the star) in movies and shows like 2013’s “Man of Steel” and 2018’s “Mission: Impossible — Fallout,” not to mention “The Witcher” and “Enola Holmes.” Of course, it takes more than a (now) famous name to land the kinds of roles that Cavill has scored. Along with talent and a captivating presence, the actor is obviously good-looking. Like, seriously handsome. Or, as BuzzFeed oh-so-accurately puts it, he’s “hot AF.” Indeed, the outlet adds that, while “they tell us perfection isn’t real, [Cavill] is falling pretty damn close to the line.” *Nods vigorously.*

Granted, Cavill was not always the super suave man that he is today. Once upon a time, he was a child who grew up on the idyllic “Bailiwick of Jersey, a British Crown dependency in the Channel Islands,” per IMDb. While he was clearly destined for a career in Hollywood, Cavill had to navigate a rather rough childhood circumstance and early failures, as well as changing looks, to get to where he is today. And where exactly is he now and what exactly did he look like throughout the years? Scroll on to find out!

In March 2021, Henry Cavill took to Instagram to share a photo of himself when he was a little boy sitting on his mother’s lap. “Today is International Women’s Day and I’m dedicating this post to the most magnificent woman I know. My mum. An extraordinary, powerful, tough, intelligent, resilient, kind, thoughtful and caring person,” he wrote. The obviously adoring son then added, “That little boy on her lap learned an awful lot about what it is to be a good man from her.”

While that gave Cavill’s followers an idea of what kind of man he has become (or at least strives to be), it also gave his fans a glimpse at what he looked like when he was a young child. With the same brown hair that he has now and an adorable younger version of the same camera-worthy smile that he flashes these days, he could have been a child star.

What the photo also shows is that the celebrity, who was born as Henry William Dalgliesh Cavill, the son of Marianne and Colin, had parents who obviously supported their child’s love of superheroes. And what makes little Cavill’s Superman shirt even more adorable is that he went on to play the character in 2013’s “Man of Steel,” as well as various other D.C. Universe films, per IMDb. Granted, that was still a few more years away and he had plenty of growing up to do before then.

Henry Cavill was bullied for his 'chubbiness' when he was young

Henry Cavill grew up as the second youngest son among a total of five brothers (yes, five!), per IMDb. Although he seems to have had a sweet bond with his family — honestly, how adorable do they all look in their fancy suits?! — things were not exactly easy for him when he was a kid and eventually a teenager due to his appearance.

Indeed, it turns out that, just like fellow stars Priyanka Chopra and Jason Momoa, Cavill was the target of bullies when he was younger. Before his life in Hollywood, Cavill went to St. Michael’s Preparatory School in Saint Saviour, Jersey, as well as Stowe School in Buckinghamshire, England. While a student, young Cavill was apparently “bullied a lot at school for his chubbiness.” Reminder: it’s never okay to body-shame someone, whether they are a kid, a teenager, or an adult.

As for Cavill, things did not immediately change for him when he left school and entered the entertainment industry. The actor went through a rough period that saw him deemed the unluckiest man in Hollywood. Fortunately for him (and his eventual fans), things started to change for the actor when he grew out of his cute youthful looks and into his adult-like hotness.

By the time Henry Cavill reached adulthood, he started to look much more like the man that we recognize today. He also started to land some notable roles. Along with appearing in 2003’s “I Capture the Castle” and 2005’s “Hellraiser: Hellworld,” per IMDb, in 2006, he popped up in both “Red Riding Hood” and “Tristan + Isolde.” The next year, things kept rolling for the burgeoning star and fans were able to catch him in “Stardust,” as well as the series “The Tudors.”

It was around that time that Entertainment Weekly (via Glamour) decided that he was the “Most Dashing Duke” on the scene thanks to his portrayal of King Henry VIII’s faithful and enduring friend Charles Brandon. If you had any doubts about Cavill performing in a period piece, that might convince you to give the series a chance. And while the career-boosting role was surely a nice boost for the actor’s ego, too — not to mention the “Most Dashing Duke” title and the fact that he was chosen to be the face of Dunhill’s fragrance “London” (see pic above) — it certainly was not the only time that he was given a title that was related to his good looks.

Henry Cavill was deemed the world's sexiest man (before the mustache)

Henry Cavill may have once been bullied before becoming the most dashing duke on-screen, but by 2011, he had begun to establish himself as a force to be reckoned with in the entertainment industry, while also earning enviable roles and an epic eight-pack (no, not a six-pack, but an eight-pack!). That was followed by the fact that, by 2013, he had been deemed the world’s sexiest man by voters who took part in a poll from Glamour (via the BBC). If you are curious, Robert Pattinson took second place after being in the top spot for the previous four years, while Liam Hemsworth came in third.

When it came to Cavill, 2013 was the same year that fans saw the actor take on the role of Superman in Zack Snyder’s “Man of Steel,” per IMDb. To many viewers’ delight, he returned to the role for 2016’s “Batman v Superman: Dawn of Justice” and 2017’s “Justice League.”

Despite that being around the same time as Cavill’s controversial mustache, he also happened to be flashing his stunning blue eyes while sporting slightly curly locks, a finely chiseled face, and an intensely muscular body by this point, which is why it was not hard to understand why so many people considered him their celebrity crush. The same can be said today thanks to the fact that the star has not lost any of his allure.

Henry Cavill's almost 40 and looking as good as ever

As of this writing, Henry Cavill is 38 years old, which means that he’s just two short years away from hitting the big 4-0. Yet the actor surely does not have to worry about getting older thanks to the fact that he’s looking as good as ever and is incredibly fit.

Anyone who follows him on Instagram knows that he regularly posts images and videos of himself working out. Sometimes that means showing up to the gym, practicing Jiu-Jitsu, racing alongside his brothers, or going for a run on a cold and snowy morning. Whatever he happens to be up to, it helps to keep his body in the kind of shape that gets noticed by fans and cast directors alike.

Indeed, considering that Cavill seems to know how to enhance his naturally handsome ways and is dedicated to amassing formidable muscles, Men’s Health explained that he “has steadily transformed himself into the kind of leading man the major studios now crave: a pure franchise player, one whose dimple-chinned dashingness and carefully engineered physique can be plugged into all manner of big-brand properties.” Or, as one Twitter user simply noted, “Henry Cavill is aging like a fine wine.”