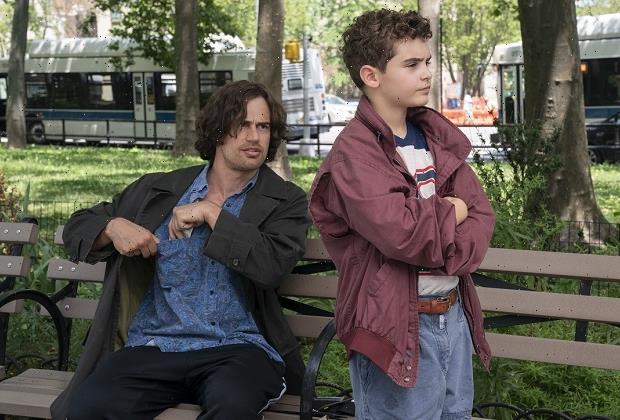 Warning: The following contains spoilers from Sunday’s episode of The Time Traveler’s Wife. Proceed at your own risk!

Tragedy drew multiple Henrys to the past in The Time Traveler’s Wife‘s second episode, in which Theo James’ character relived his mother’s horrific death in a car accident when he was just eight years old.

Young Henry time traveled out of the vehicle to just seconds before the crash, sparring his own life, but his mother was tragically beheaded in front of Henry’s own eyes. Drawn to the pivotal moment like gravity, Henrys of different ages converged on the heartbreaking memory. Portraying all of them in one sequence “was the less challenging bit because it’s a lot of Henrys at different points,” James tells TVLine. “We shot those almost over the course of the whole month we were there. We’d do a little bit here, a little bit there.”

Instead, the “tricky bit” for James was the episode’s closing scene, in which 28-year-old Henry listens to an audio recording of his opera singer mother answering a question from Clare, which a much older Henry delivered to his mom in the past. “That’s a big moment for him,” James says. “Through this conceit of time travel, he’s able to manipulate almost the course of events. So his mother then speaks to Clare, who’s now the most important person in his life. Imagining someone that has died many, many years ago, when he was eight, kind of echoing back through the ages is extremely sad and extremely emotional. I wanted to do that justice.”

To bring authenticity to Henry’s heart-wrenching journey and how he copes with his mother’s death, executive producer/director David Nutter tapped into his own past. “What was really important there was to really play out what that must be like for a child that really experienced such an incredible loss at such an intense time,” Nutter shares. “My father died in a car accident when I was a year and a half old, so I was too young to kind of feel that. But I kind of tried to bring that out in reality, and also really deal with the fact that something like that never leaves you and it never gets softened or never becomes a distant memory, especially with Henry, who basically relives it every single day of his life.”

Finding the right young performer to tackle the character’s childhood trauma alongside James as adult Henry was also key. “This young kid, [General Hospital vet] Jason David, came in and he looks like a spitting image of Theo,” Nutter recalls. In fact, the resemblance between the two actors is so strong that in a library scene, “there’s a picture of young Henry, and one of the pictures is actually a young, young Theo and not a young Jason, and I bet you can’t tell which one it is.”

What did you think of The Time Traveler’s Wife‘s second episode? Hit the comments!