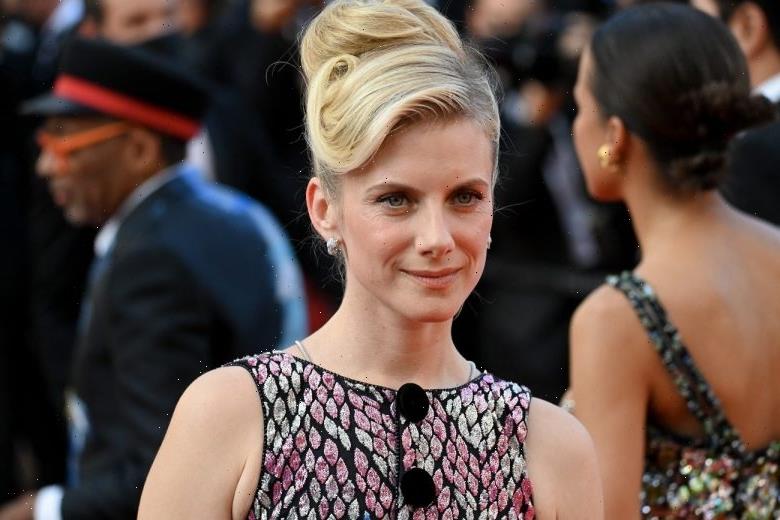 Mélanie Laurent was getting close. With less than a week to go before she was set to start shooting her first studio-backed feature film — a long-gestating adaptation of Kristin Hannah’s bestselling historical novel “The Nightingale,” with real-life sisters Dakota and Elle Fanning as a pair of estranged siblings caught up in World War II — the first wave of the COVID-19 pandemic shut down production in Budapest.

More than a year later, Laurent’s studio debut is still in a holding pattern, but the prolific French filmmaker, actress, and singer isn’t wasting any time: in the interim, she’s already completed another film, “The Mad Women’s Ball,” premiering this week at the Toronto International Film Festival, with a planned Amazon release this fall. It seems nothing can stop Laurent from creating, even if nature itself has forced her to pivot.

“It’s very complicated for me to talk about [‘The Nightingale’], because we haven’t found any solutions right now,” Laurent said during a recent interview with IndieWire. The film, originally set for release in December 2021, was already in pre-production and just five days out from its production start date when the pandemic hit in March of last year. After production was shut down, Sony pushed the film’s release date to December 21, 2022, but it has yet to resume production.

The prep process was a major change for Laurent, who was used to taking something of a run-and-gun approach to her previous films — “When you’re a director in France, there is no difference, prep or shooting is kind of the same,” she said with a laugh — and only adds to her enthusiasm to get back into the studio saddle. She liked the experience, and the demands of studio filmmaking actually seemed to appeal to her organized nature.

“I’m pretty sure when you agree on everything in prep, then you’re pretty free on set, and then they just let you be who you are because you spent so many hours to just make sure everybody is okay with your ideas,” Laurent said. “It’s extremely frustrating, as you can imagine, for me to just survive through everything. I was super happy about making that movie and to make everything work. I was ready to shoot, and then we couldn’t. I’m just waiting for the next steps.” 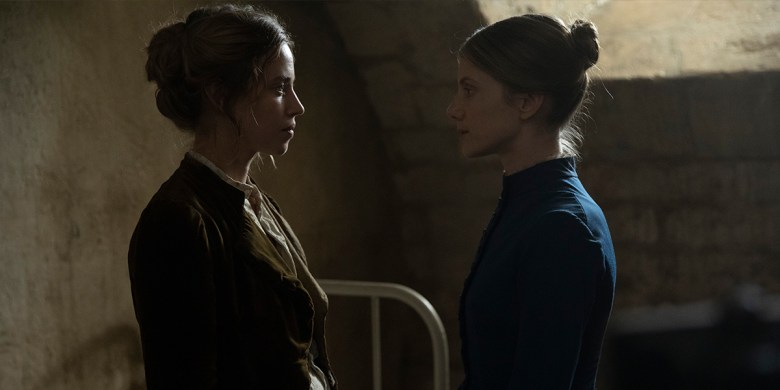 With her schedule suddenly open, Laurent decided to do what felt natural: direct another film. She had already signed on to write and direct “The Mad Women’s Ball” in January 2020, but without “The Nightingale” blockading her calendar and with France emerging from its second lockdown at the end of November, she jumped at the chance to make the film sooner, rather than later.

Based on Victoria Mas’ bestselling novel of the same name, the 19th-century-set film follows the aristocratic Eugenie (Lou de Laâge, who previously starred in Laurent’s critically acclaimed “Breathe”), who is packed off to a Paris asylum after she reveals to her family that she hears ghostly voices. There, she meets a cadre of other outcasts, along with a sympathetic nurse (Laurent) who starts to believe that Eugenie’s visions and voices are not the product of mental illness.

Production was set in Rochefort, located in western France, and most of the action was shot at the Marine Hospital, which is now a museum. “We were testing twice a week and it was one location,” she said. “It’s just in the hospital, and we made that hospital ourselves and everybody was coming from that small town. There were no cases there [at the time].”

Thank Laurent’s producers for cooking up another way to shrink the cast down: by tapping Laurent to play a role in the film, the first time she’s directed herself since her debut feature, 2011’s “The Adopted.”

“It’s always coming from producers. It’s never coming from me,” Laurent said of her casting. “Especially for this one, because we had to set up the movie in the middle of the second wave, and I had to make sure everybody would be safe, and the safer way to do it was to put myself as one of the leads. [It was a way of] making everything easier, because everything was so uncertain at that moment. Finding an actress, finding people, everything was a mess, really. We really felt like we survived through something. It was a small miracle to make that movie happen at that moment.”

Laurent admits that casting herself is rarely something she’s excited about in the moment, but the results are always fruitful.

“I’m never really happy about doing it, and then I’m super happy at the end,” Laurent said. “I love directing my actors while I’m acting in it, because it’s just the best access to intimacy. They’re sweet enough and soft enough and smart enough, all my actresses, to just accept that, because it’s maybe also weird for them. Especially because I’m also a mother and most of the time I have my babies on set. So I’m directing, in a costume, my actress, with my baby on my lap. It’s a lot to handle, but I love it, feeling like I can be a mother and a director if I want to. I can be an actor and direct my actors.” 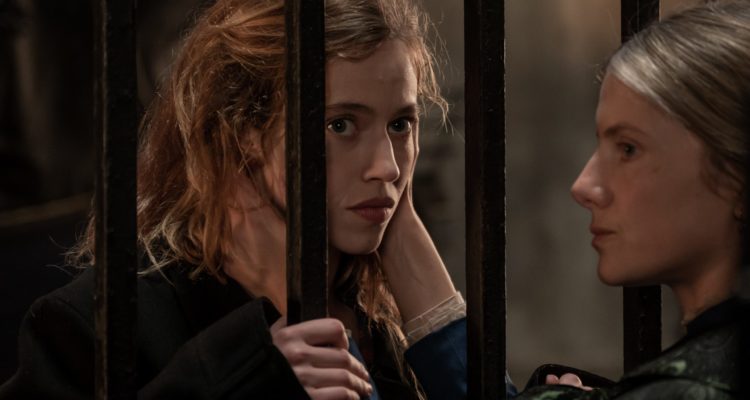 That appetite for working hard and occupying as many roles as she can is also reflected in Laurent’s view on the current state of filmmaking. Maybe, she thinks, women can have it all. She’s certainly trying to.

“Female directors have the chance right now,” she said. “I wish for all those female directors to just take that spot, take that space, and just try to make the movie you always wanted to make. For myself, I’m super happy to keep doing what I was doing before, except that I have more choices and I have more of a voice right now … Every time I’m finishing a movie, I just want to make another one, because I feel like, ‘Oh, okay, I learned that.’ I just want to make another one to just make it better and just fix everything that was not working. It’s like a lab for me to make movies.”

Even as she evolves as a filmmaker, many of Laurent’s themes are recurring, like her desire to burrow deeply into the inner lives of women, something that was already in place with her first film and has continued through her subsequent five features. “I just go for powerful women who have something to say,” Laurent said. “They can be fragile, they can be victims, they can be strong. I care about seeing them. I just love women so much that I don’t want to change that.”

Speaking of women, Laurent is still thrilled by her other big 2021 endeavor: serving on the Cannes Competition jury alongside a pack of other ambitious and creative women, including fellow filmmakers Maggie Gyllenhaal, Mati Diop, and Jessica Hausner, plus singer Mylène Farmer. The jury, led by president Spike Lee, awarded the Palme d’Or to Julia Ducournau for her film “Titane.” That choice felt natural to Laurent. 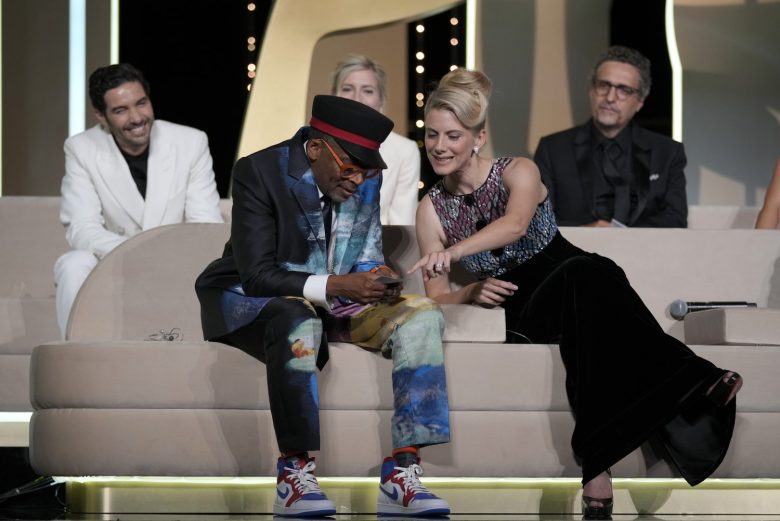 The Cannes Competition jury, including Spike Lee and Mélanie Laurent

“We were the first jury with more women [than men],” she said. “And then we gave the Palme d’Or to a female director! And it’s funny how we, inside the jury and inside that experience, never felt it. It didn’t feel weird. We, obviously, loved that movie way more. And then, after choosing that movie, we said, ‘Oh, it’s great. It’s a female director.’”

And while Lee infamously spilled the Palme d’Or beans early, announcing Ducournau’s win at the top of the awards ceremony with Laurent even attempting to stop Lee from her perch on the stage, she remains delighted by it in retrospect. After all, it fits the world today, one that requires people to roll with the punches, accept the craziness, and keep pushing forward.

“It was absolutely not his fault. We didn’t rehearse, and then the host was talking in French, and when she said in French, ‘We cannot wait to hear the Palme d’Or later,’ he just heard ‘Palme d’Or,’” Laurent explained of Lee’s slip-up. “So for him, in his point of view, what he’d done was just totally normal. But, you know what? I found that ceremony very charming. We’re always doing the same sort of ceremony, very serious and in order, and I felt that it was a special year. The festival was really literally expressing something of the world right now. Being messy is our life right now, and there is a little bit of charm in that.”

“The Mad Women’s Ball” will premiere at the 2021 Toronto International Film Festival. Amazon will release it later this year.