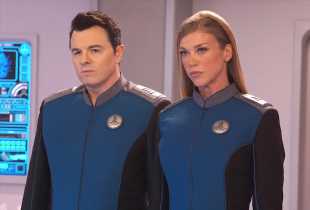 The Orville is setting a dramatic new course.

After two seasons on Fox, Seth MacFarlane’s sci-fi epic will move to Hulu in Season 3. In making the announcement at San Diego Comic-Con on Saturday, MacFarlane also revealed that the third season will not debut until late 2020.

“The Orville has been a labor of love for me, and there are two companies which have supported that vision in a big way: 20th Century Fox Television… and Fox [network], which has been my broadcast home for over 20 years,” MacFarlane said in a statement. “My friends at the network understood what I was trying to do with this series, and they’ve done a spectacular job of marketing, launching and programming it for these past two seasons. But as the show has evolved and become more ambitious production-wise, I determined that I would not be able to deliver episodes until 2020, which would be challenging for the network. So we began to discuss how best to support the third season in a way that worked for the show. It’s exactly this kind of willingness to accommodate a show’s creative needs that’s made me want to stick around for so long.”

That same sentiment was echoed by Carolyn Cassidy, 20th Century Fox’s President of Creative Affairs. “Fox Entertainment has been a fantastic home for The Orville,” she said, “and their willingness to support the show’s move to Hulu is incredibly appreciated. They really are great partners to us on so many shows and this is one more example. We’re thrilled as a studio to find this creative solution which is so meaningful to Seth and keeps the show on track to continue entertaining its millions of fans.”

While The Orville‘s move to Hulu will certainly come as a surprise to fans, the delay between Seasons 2 and 3 should not. After all, they waited nearly 13 months for the series’ sophomore run following the end of Season 1.

Will you follow The Orville over to Hulu (if you don’t already have a subscription)? Hit the comments with your reactions to the big move.