The first episode of Season 2 of “Russian Doll” ends with Nadia (Natasha Lyonne) alone in Central Park, at an impressive new low for a woman who’s died dozens of times: After boarding the 6 train in 2022, she’s disembarked in 1982, on the night her mother, Nora (Chloë Sevigny), lost the 149 gold coins that made up Nadia’s family inheritance. To make matters worse, Nadia is (more or less) occupying Nora’s body.

But the episode also ends on a wonderful musical high, the crashing cymbals and blasting organ of “Get It While You Can” adding momentum to a rotating 360-degree shot that switches between Lyonne and Sevigny and back again. Janis Joplin’s rendition of the gleeful soul track isn’t really for either mother or daughter. It’s for us. It’s a celebration of the fact that “Russian Doll” is back and weirder than ever.

Music supervisor Brienne Rose and composer Joe Wong spoke to IndieWire about creating a soundscape for Season 2 that retains the series’ core sensibility while also adapting to the latest spacetime trap Nadia finds herself in: going back in time to her mother’s and (eventually) her grandmother’s eras, and trying to see if she can create a future slightly less messed up for herself. “We definitely wanted [the music of Season 2] to feel like its own universe separate from Season 1,” Rose said. “Some of the music that we used in Season 1 had this quality of, like, looping, whereas some of the music in Season 2 had this quality of [a] propulsive back-and-forth… based on the [subway] trains and that linear quality.”

There is a sometimes lurching, sometimes breakneck, sometimes skidding momentum to both the soundtrack and the score of Season 2, not unlike a late-night subway lurching its way towards Brooklyn. Composer Joe Wong summarized the score’s ethos as, “We take everything past its logical conclusion and see what happens on that next step.”

But of course Wong needed to account for a couple of different next steps, as Season 2 spans trips not only to the gnarly East Village of the ’80s but also war-torn Budapest in the ’40s and East Berlin in the ’60s. In thinking through the score, he had a jumping off point in Lyonne’s musical inspirations for the season. “I was thinking, ‘OK, well, what if [composer] Wendy Carlos and Kevin Haskins, the drummer of Bauhaus, who is a friend of mine, and Martin Gore from Depeche Mode and [composer] Terry Riley and Syd Barrett [from Pink Floyd] were all in a band? What would it sound like?’ So I’m thinking about the people that Natasha is mentioning… [and imagining] a supergroup in my head.”

This theoretical supergroup has a deliciously dark, nervous energy to it, propelled by analog synthesizers popular during the late ’70s and early ’80s. The sound was something that Wong found worked across eras, and acts almost as familial threads that pull Nadia across space and time. For the Budapest sections of the season, both Wong and Rose took their cues from the work of Hungarian classical composer Franz Liszt; his pulsing, ornate keyboard compositions felt like a match for Nadia, but Wong was able to push that influence further.

“There’s a piece called ‘Analog Doll.’ It’s an adaptation of the Season 1 theme, but first we tried it in a Liszt-y way on piano and it didn’t feel quite right,” Wong said. “So then we tweaked it and tried it with that type of performance, but on analog synths. That was kind of when we found the sound of this season.” 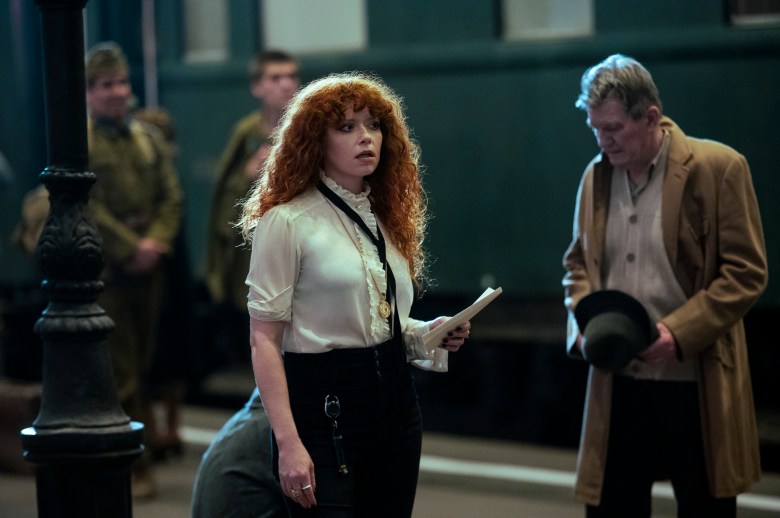 Rose agreed that for the source music, it was important to start from the core of Nadia’s personality and build outward, with every track featuring a little bit of Nadia’s “trench coat” energy. It’s why Nadia’s entry into Nazi-occupied Hungary at the end of Episode 4 is marked not with Liszt or any period music but with Nena’s “99 Luftballons.” Rose said that the piece is a bit of a joke in and of itself because it’s so well known, but that in general, “there is a playfulness that we want to keep in the music. Ultimately there’s a real strong, comedic element.”

Wong said the score must always convey the show’s spirit, no matter what the emotional purpose is of a given scene. “Sometimes [I’m keying] into the emotional undertones and that’s the function that the music is playing,” he said. “But I also strive to make some of the cues feel like the musical equivalent of a subway passing you through the spacetime continuum.”

That use of music to convey a larger, weirder, very “Russian Doll” vibe is part of how the series emphasizes its temporal anomalies for humor and accentuates Nadia’s character in new ways, getting the viewer to emotionally understand the show and its protagonist in a more nuanced light each time; truly, Bauhaus’ “Bela Lugosi’s Dead” embodies the type of person who’d chase a 40-year time warp with a shot of bourbon. And using Liszt’s “Liebenstraum No. 3” as the backdrop to Nadia’s trip to a Nazi warehouse full of confiscated Jewish property highlights both the poignancy of the mass theft and the speed at which Nadia’s mind moves. 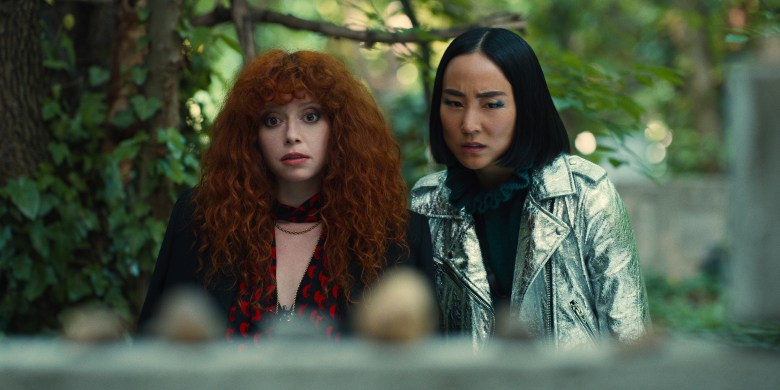 While Wong deliberately tries to build mash-ups of influences to create this effect in the score, Rose said she’s influenced by Wong’s work when thinking about source music. “[The score and the music are] working together constantly. And that just makes it such a dream because you want everything to feel cohesive, informing all of those pieces coming together,” Rose said.

Score and soundtrack come together in the season’s finale. Pink Floyd’s “Shine On You Crazy Diamond” begins Nadia’s walk back through modern Manhattan, but becomes score as she gets where she’s going. Rose described the track as a big get for the show, but “there’s all these different parts to it. And there was a moment where we were like, should we use [the entire song]?” So Wong came in to score the rest.

“I ended up having to score 10 minutes of that 15 minutes, I think,” he said. “So it was basically like revisiting all of the themes from the whole show, [which reminds me of] another way that I conceptually think about the music for the show and the way that it was constructed. The music itself, the melodic motifs, are able to be nested inside of one another in like a contrapuntal, fugue-like way. So they’re like a Russian doll.”