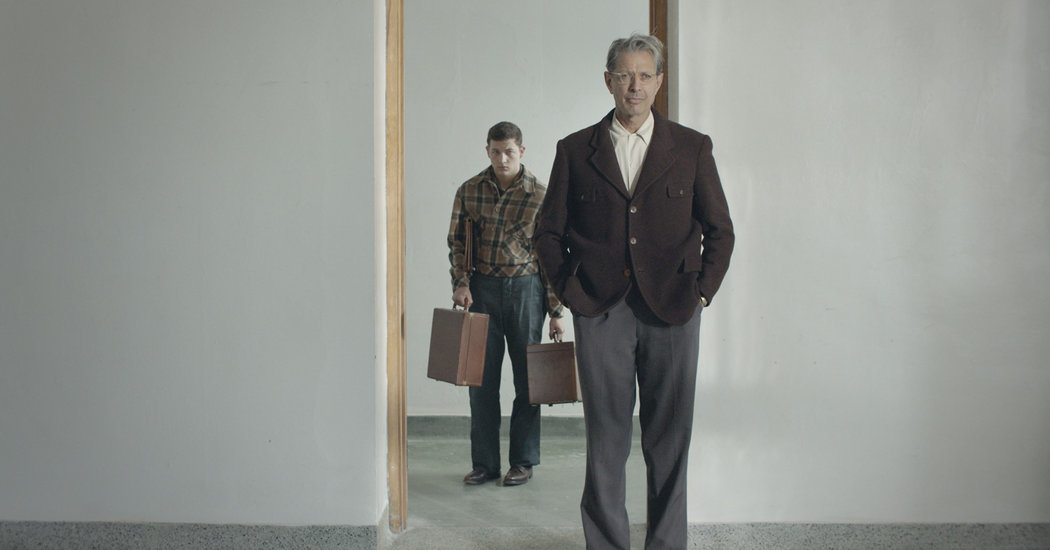 More times than I can count, I have thanked the movie gods for Jeff Goldblum, whose lanky, often loquacious presence can lighten almost any project. Even so, he has his work cut out in “The Mountain,” Rick Alverson’s ferociously controlled, adamantly depressive story of a 1950s road trip taken by Andy (Tye Sheridan), a recently bereaved young man, and Dr. Wallace Fiennes (Goldblum), the itinerant psychiatrist who befriends him.

Fiennes, a genial freelance lobotomist, might not be the healthiest companion for the troubled Andy, whose mother has long been institutionalized. Virtually orphaned when his domineering father (a grouchy Udo Kier) keels over while teaching a figure-skating class, Andy moves like someone carrying an unbearable weight. Glum and brooding, he barely reacts when Fiennes hands him a camera and invites him on an asylum tour to photograph the patients who will undergo Fiennes’s soon-to-be-discredited surgery.

As the trip progresses, Andy begins to connect with these lost souls. The pale, docile women seated on hospital beds, legs dangling and eyes vacant, look strangely alike, their common illness erasing their individuality. These bleached, oppressively sterile scenes have a peculiar, anesthetized beauty; yet they infuse the film with a hopelessness that’s barely relieved on the leafy drives between appointments, and in the bars and bowling alley where Fiennes relaxes by fondling random women. Goldblum might be uncharacteristically low-key here, but without him this picture would at times feel unbearable.

Like Alverson’s 2015 character study, “Entertainment,” “The Mountain” sets forth a profoundly anhedonic vision of America — and humanity — that’s simultaneously upsetting and mesmerizing. Tinny music from old transistor radios penetrates air that’s thick with despondency and a nightmarish, icy nostalgia. Disturbing themes of male dominance and violent female subjugation are presented, but not confronted. And as the passive, mostly silent accomplice to Fiennes’s boozy womanizing and horrific treatments, Andy seems simply a receptacle for his director’s persistent sense of alienation. So repressed is he that it’s impossible to tell whether his attraction to an interesting young patient — too interesting to survive Alverson’s joyless purposes — is genuine romance or simply a transferred longing for his mother.

By the time the idiosyncratic French actor Denis Lavant appears, playing a New Age healer given to bizarre, drunken monologues about art and hermaphrodites, the movie appears to have tipped into Lynchian surreality. The performance disrupts the film’s trance-like atmosphere and woozy narrative rhythms, and it’s left to the director of photography, Lorenzo Hagerman, to pull things back together. Working a milky-gray palette and painstaking framing, he builds a miraculously consistent, tranquilized aesthetic that holds through the movie’s unexpectedly logical conclusion. It’s impossible not to admire his and Alverson’s synchronicity; it’s just really hard to enjoy it.

When you purchase a ticket for an independently reviewed film through our site, we earn an affiliate commission.