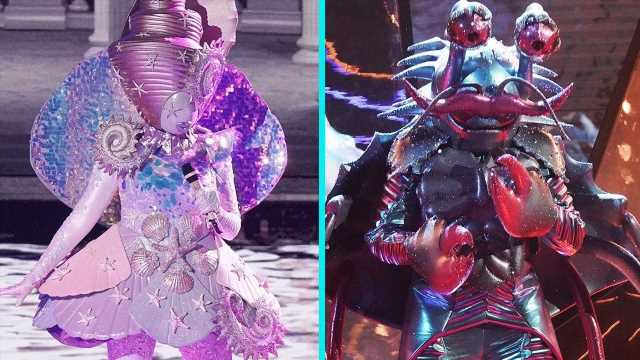 The Masked Singer returned Wednesday with a jam-packed two-hour extravaganza, in which the remaining contestants faced off in a Super 8 showdown! After all the songs were sung and guesses were made, fans had to say goodbye to not one, but two costumed celebs.

The Piglet, Robopine, The Seashell, The Yeti, The Russian Doll(s), The Crab, The Chameleon and The Black Swan all delivered some of their best performances to date as the the show’s panel of celebrity “detectives”  — Robin Thicke, Nicole Scherzinger, Ken Jeong, and Jenny McCarthy and guest panelist Rita Wilson — all did their best to figure out who is under each elaborate costume.

However, with all the talent still in the running, no matter who was going home, it was going to be painful. And the first star to get the axe was The Crab.

After the panelists made their final guesses about The Crab — who joined the competition as a wildcard contestant — he finally unmasked, and revealed himself to be none other than singer Bobby Brown!

Brown spoke with ET on Wednesday about his time on the show, and said how exciting it was to be a contestant after having been a Masked Singer fan since the first season.

“It was fun being a part of the show, it was fun shooting it, and I loved the camaraderie,” Brown shared. “Just being able to make my kids smile, it served its purpose, in the three times that I did perform.”

“Me and my kids have been watching the show since day one,” he shared. “Every Wednesday, it’s TV time after dinner at the Brown house… [so] when I got the call… I was skeptical, but at the same time I was also flattered that they chose to call me, because I’ve been such a big fan.”

Brown delivered a fantastic, energetic number during Wednesday’s show, belting out a wild rendition of Phil Collins’ “In the Air Tonight,” making his elimination all the more surprising.

After Crab unmasked, it was time for the night’s second elimination, and the next star to end up getting the chop was The Seashell! Despite a show-stopping performance of Tiffany’s “I Think We’re Alone Now” that several panelists said was The Seashell’s best number to date, she still ended up getting booted.

After the panel once again made their final guesses, The Seashell removed her beautifully ornate mask and revealed herself as actress and TV personality Tamera Mowry, who definitely proved that she’s a seriously talented songstress as well.

Mowry also spoke with ET on Wednesday, and explained how getting to sing for people again — for the first time in a long time — has reignited her passion for music and performing live.

“I got to relive a dream of mine, and I don’t want to stop!” said Mowry, who explained that, when she first got cast in her iconic ’90s sitcom Sister, Sister, she was considering her future career path, and choice acting over singing, and has long wondered about the other path she could have taken.

“I’m addicted to the mic now,” she added with a laugh.

She also reflected on her song choice, and her connection to the Tiffany hit that she slayed on Wednesday’s episode.

“I wanted to pay homage to my childhood, when I actually got that entertaining bug,” Mowry shared. “My sister [Tia Mowry] and I, we used to sing that song together, and we put a little dance together with our babysitter… and we put together a routine to that song. So I had fun. It was awesome.”

Now, the Super 8 has been whittled down to the “Spicy 6,” as host Nick Cannon called them, and the competition heats up even more as additional clues are revealed and all-new songs are performed in the coming weeks.

If you’re trying to crack the mystery of the costumed contestants like the rest of America, check out our running list of spoilers, hints and best guesses, where we break down all the clue packages and make wild (surprisingly accurate) predictions about the singers’ secret identities.

Check out the video below to hear more about the wild and unexpected unmaskings that have already rocked the fifth season of The Masked Singer.

The Masked Singer airs Wednesdays at 8 p.m. ET/PT on Fox. For more on this exciting season, check out the video below!