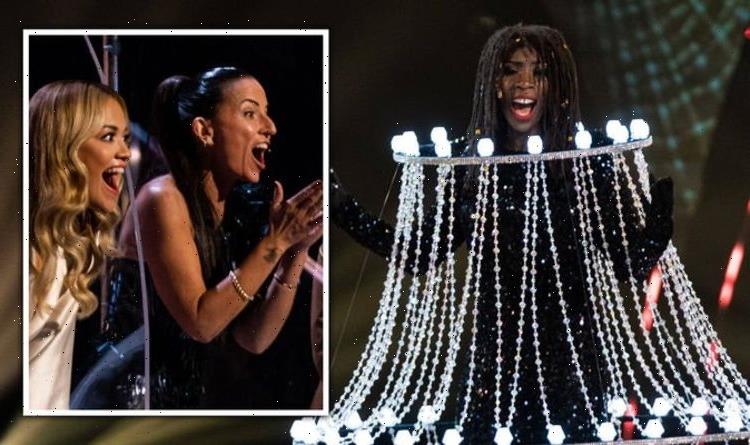 Music icon Heather Small was unmasked as Chandelier in the opening episode of the third series of The Masked Singer. The M People star disguised her voice and stumped judges Jonathan Ross, Davina McCall, Mo Gilligan and Rita Ora who failed to save the star’s place in the competition. However, speaking to Express.co.uk and other press, the singer reveals the lengths ITV goes to hide the celebrities’ identities.

Discussing what it’s like backstage, Heather said: “This is the most surreal part of it because no one knows who you are, only a very select few know who you are.

“You have a balaclava on, you can’t even see your skin colouring, you got gloves on and I enjoyed it.

“I did enjoy it because it helps to keep you in character and it helps to bring out a character so you can then reinvent yourself.

“Everybody is so kind you don’t feel foolish in the least bit so you just enter the spirit of what it is and you know that you’re gonna have a costume and your identity is masked.”

“It’s masked from the time you head towards the studio you’ve got to put that all on before you even get out the car so I don’t know what the driver must’ve thought,” she continued.

“You have more than one identity, you have two names so you just get into the subterfuge of it, you feel a little bit like a spy.”

Explaining why the celebrities are given two names, she added: “Well, you’ve got the name, Chandelier and you have another name.

“It’s really fun and there has been an absence of fun for the last two years,” she shared.

“And for me, fun is getting out there meeting people and singing and there hasn’t been a lot of that.

“So this was like I say taking on a different identity and interacting with people.”

Explaining why she wanted to take part in the show, she said: “I’d seen Gabrielle and Joss Stone saying how much fun it was and in these most challenging of times a little bit fun is good for everyone.”

Judges guessed that Chandelier could have been Rachel Riley, Claire Richards or Debbie McGee.

On their suggestions, Heather remarked: “Hilarious, as they were so off the mark.”

Get the latest three-day weather forecast where you live. Find out by adding your postcode or visit InYourArea

“Why does #TheMaskedSinger even bother with clues since there’s no way anyone could ever guess them! I still can’t believe Heather Small had a ship on her head because her initials are HMS,” @BlueMonkey19 joked.

@NatalieEdex wrote: “Omg I am such a massive fan of Heather Small #TheMaskedSinger.”

The Masked Singer continues on ITV on Saturday at 7pm.