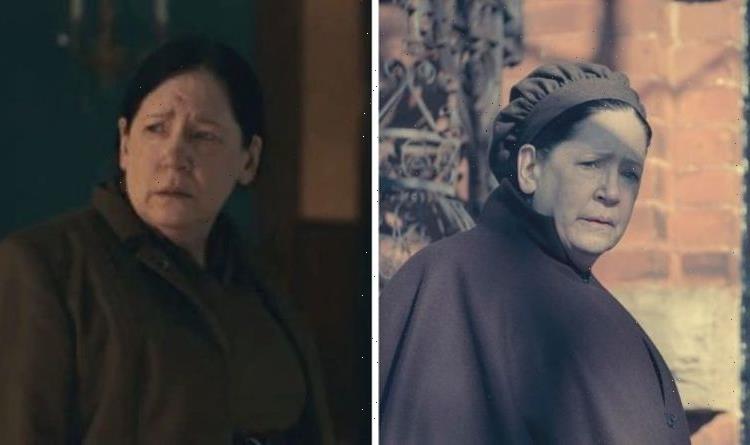 Hulu’s dystopian series gave viewers an insight into life in a world where women were stripped of their human rights and were forced to live in a patriarchal society. Aunt Lydia (played by Ann Dowd) was one of the enforcers of the state, so her recent admission about her character may surprise viewers.

Actress Ann Dowd was joined by her fellow co-stars and the showrunners of The Handmaid’s Tale for an interview with Deadline.

She was asked about her opinion of the new dimensions of her character, Aunt Lydia.

To which she responded: “It’s been coming gradually along from season one, little areas actually, her attachment to June in the early parts of the series.

At the beginning of The Handmaid’s Tale, Aunt Lydia was the evil disciplinarian in charge of training the women at the Red Center.

With a cattle prod by her side, Lydia often used it to electrocute the women as punishment and depending on what they did would determine how long they were electrocuted for.

Ann went on to say: “That’s all you can hope for in a character, is shifting and being affected by what has affected them.”

In season three, viewers got an insight into Aunt Lydia’s life before Gilead went into power and how she became the monster that she was.

She was a fourth-grade teacher and after one of her students was picked up three hours late, Lydia criticised the mother and judged her.

However, in an effort to ensure they both had a warm meal, she invited them over for dinner and as time went on she became close to the mother, but this all changed when a romantic evening went wrong.

Because the mother had encouraged her to pursue the date, she decided to punish her by calling social services and having the child put into foster care.

Speaking more on her character, Ann explains: “My understanding of Lydia has been that as she begins to realise how much she loves her little Janine and how much she feels responsible for what happened to her, her love and hate for June and admiration for her, that walls are going to crack.”

Aunt Lydia had Janine’s eye taken out as punishment for swearing at her, this understandably traumatised her and forced her to become naive and timid at times.

Fans also saw how she would sometimes extend extra grace to Janine and show her a little more mercy because she felt bad about her eye.

“That’s what love does in my opinion and therefore the alley is not so narrow you can’t help it,” Ann continued, “I think that’s a wonderful direction for Lydia to go in.”

Season four saw Janine back at the Red Center after a failed attempt to escape with June Osborne (Elisabeth Moss).

There Aunt Lydia had some pity on her and tried to brainwash her into blaming June for the reason she was back in Gilead, whereas Janine was proud of her for making it to freedom in Canada.

Ann concluded: “I think It’s going to cost her but she’s very smart and she knows what it means to survive she just has to be a little more careful about her own emotional state.”

Season four saw Aunt Lydia become more frail and sensitive about everything, perhaps she’s coming to realise Gilead wasn’t all it was cracked out to be.

Especially after June wreaked havoc in the state and continued to do everything she could to bring it down.

Season five could see Aunt Lydia escape Gilead with Janine as there was nothing really there for her anymore and her fellow colleagues had begun doubting if she could actually do her job well.

The Handmaid’s Tale season 4 is available to stream on Hulu in the USA and airs Sundays on Channel 4 in the UK.