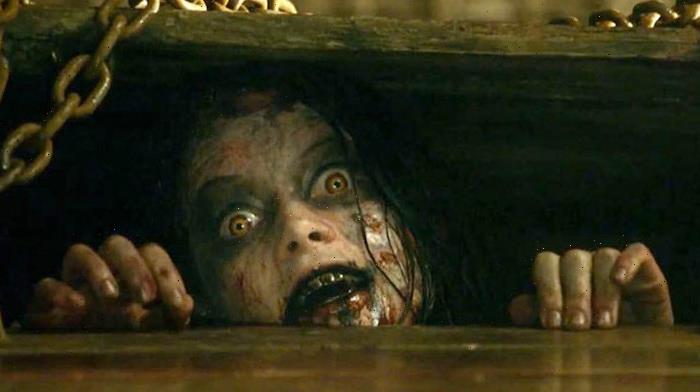 (Welcome to Scariest Scene Ever, a column dedicated to the most pulse-pounding moments in horror with your tour guides, horror experts Matt Donato and Ariel Fisher. In this edition: Matt finally settles on which scare from 2013’s Evil Dead takes top honors.)

On October 31, 2019, I sent /Film commenters into a frothing rage by dropping the final 25 selections of my “Best Horror Movies Of The Past Decade” roundup. Among the creamiest of the crop, Fede Alvarez’s Evil Dead ranks in ninth because that’s where it damn well deserves to be. The remake is, without hyperbole, terrifying in most instances. Alvarez and co-writer Rodo Sayagues take Sam Raimi’s The Evil Dead mythology and plunges viewers into a big-swingin’ woodland horror screamer that is always a brazen, nasty, viscerally paralyzing brand of nightmare. This ain’t Evil Dead II with cackling deer trophies or slapstick shenanigans.

My Scariest Scene Ever selection from Evil Dead does walk down the creaky wooden stairs to the basement, but it’s not Jane Levy’s split-tongue french kiss. I adore when Mia (Levy’s addict protagonist) must fight her demons as a literal demon under a heavy saturation of blood rain, but that’s still not the most frightening sequence. As the Japanese horror influences of wellholes and splashy water pools overtake Evil Dead even just for an aside, Alvarez constructs the ultimate out-from-the-darkness scare. Just one of the many tasty sprinkles on this gore-met sundae that surges a jolt of adrenaline every Halloween during my favorite seasonal rewatch.

The Story So Far

At this point, bodies have mounted from canine Grandpa to scalded Olivia (Jessica Lucas) and nailed Natalie (Elizabeth Blackmore). Eric has been badly bludgeoned with a crowbar and is clinging to life. Mia remains locked under chains that restrain the basement hatch door, where she’s been able to tease and witness whatever carnage the Naturom Demonto conjures. David is running out of options and realizes that dousing his family getaway shack in gasoline before lighting the site ablaze may be the last sane option left.

Mia — still a Deadite — then begins singing a song from their childhood, which causes David to balk. Should the etchings and pictures in the Naturom Demonto be correct, burying Mia may also break the possession’s curse. David wants to save his sister given his racking guilt and exposed neglect, even if it means he might die in the process. Mia won’t stroll into an open grave willingly. Whatever has control of Mia will lash back against David’s heroic efforts, as he stares down the basement steps where the putrid stench of animal corpses still lingers.

“This time, the only f**king way is the hard way.”

David descends the rickety staircase into Mia’s dungeon, flashing his portable light to cut the basement’s limited visibility. A wide-angle shot catches David pointing his beam atop a workbench where a box cutter sits. The beam dances away and returns, only the blade is gone. We know Mia lurks somewhere, hidden by shadows. The screechy string score is the only noise; outside, water droplets hit stone with an echo. David is somewhere he shouldn’t be, and the dread is incalculable.

The threat of supernatural attack hovers thick in the air as David shuffles towards an open door. As he inches towards the entryway, some wooden planks fall to the side and clattering can be heard as if someone’s just triggered a bunch of noisy traps. The door slams shut. David twirls to survey his immediate area, but still, there is no Mia. Just a false sense of security in his lonely predicament.

As David reopens the slammed door, his first steps are into a flooded chamber where an overflowing well ripples on the surface. David’s flashlight reveals emptiness as he approaches the catty-corner tub. With his syringe ready, dribbling its sedative, David approaches where he thought Mia was hiding, except she’s reappeared behind him on the other side of the room when we spy her milky figure before the unaware sibling.

Mia lets out a banshee’s howl in motion as if Levy’s hanging on a rig that imitates the illusion of flight, hurtling towards her target with Checkov’s box cutter held with aggression. Alvarez zooms camera focus onto Mia’s deranged facial expressions — greasy jet-black hair dangles in front of her rotten face and yellow grin — with the flashlight as our only source of illumination bouncing side to side. Mia slashes David’s arm and tosses him around like a ragdoll, but that initial lunge encapsulates everything horror cinema desires jump scares to achieve.

If I remember correctly, an interview or bonus feature claims that Shilo’s first take of the sequence was without any information, so he walked the scene like a Halloween maze. That glance of abject, paralyzing fear from David? Presumably genuine, which would make sense. An entirely rational response to Deadite Mia, with Levy’s heavy application of gnarly undead makeup becoming the film’s gruesome signature outside despicable mutilations of the flesh.

Ah, Evil Dead. How do I love thee? Let me count the ways!

No, screw that, who has the time?

I’ve seen this movie a lot. Not as much as Matt has, but that’s a high bar to meet. This isn’t the scene that gets me the most, but it’s definitely one of the scenes that gets me right in the scares. Real good, too.

Matt has already mentioned two of the other truly blood-curdling scenes in this movie. But let’s be honest, those are two of many. From top to bottom, this adaptation is stacked with scares, and I wholeheartedly agree with Matt that it is one of the best horror movies of the last decade. I’d even go as far as to say it’s one of the best horror remakes of all time, but I don’t think the cheese stands alone on that one.

The scene that Matt’s chosen is legitimately horrifying. On top of being a fun homage to Ash getting the ever-loving sh*t kicked out of him by Henrietta Knowby, it uses one of my “least favorite” jump scares (AKA: the jump scare that’s probably the most effective on me) — creepy things running at you at breakneck speed.

The tension throughout the entire film is so thick you need a chainsaw to get through it. But that’s steadily built and built and built leading up to this moment, which isn’t even the big release! But there she is, Miss Deadite Mia, just lunging at David, so, basically, lunging at you the viewer. They actually had her on a dolly to get her to move like that, and it works. What’s so much worse is the damn box cutter! It’s just salt in the wound, in a way. She’s already scared the absolute crap out of you, so let’s just have her make these brutally cringe-inducing slashes that look like deep papercuts for good measure.

Maybe my favorite part of this scene, however, is poor Eric (Lou Taylor Pucci) getting one final jab with the aforementioned box cutter. He can’t even pull it out; only the sheath comes off, but the blade stays stuck between his ribs. And there’s David, truly barely a scratch on him (relatively speaking). Talk about adding insult to injury!