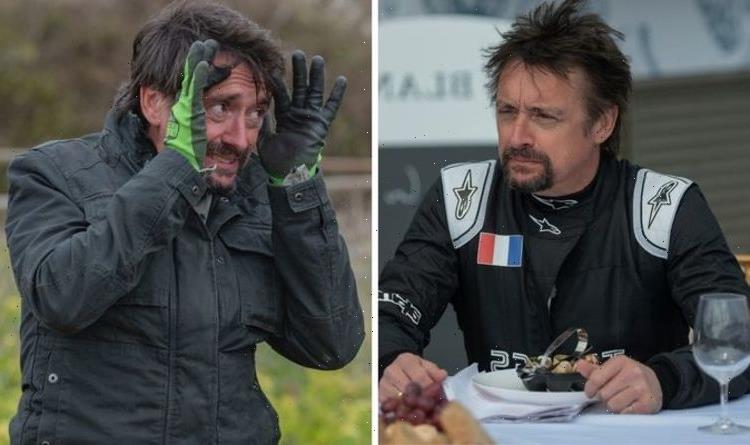 Next week, Jeremy Clarkson, Richard Hammond and James May will be back with a second Lockdown Special of The Grand Tour. The trio will be taking viewers on an epic road trip starting in the Welsh hills before reaching the English Channel. Throughout the series, the presenters will go mountain climbing, drive propellor powered cars and take on a helicopter stunt.

Speaking ahead of the new series, Richard opened up about his family connection to France.

He went on to explain how the upcoming series of The Grand Tour is different from the last.

“It was our attempt at making cultural observations, prompted by the slightly provocative concept of ‘What’s the matter with the French?’,” the former Top Gear host began.

“I loved that idea, it was such a good starting point for the show, but by the end of it, we come to the conclusion, ‘Oh, nothing’.”

“I remember as a 10-year-old or 12-year-old, getting on the ferry, and thinking how they speak funny, and they’ve got funny money, and it’s amazing.

“So it always seemed exotic to me, even though it’s closer than some towns and cities in Britain are to where we lived.

“It’s a long way from us socially, and attitudinally. They’re different, aren’t they, the French, and that’s why it’s a great stepping-off point for the show.”

He added: “It’s not surprising, given that they are certainly different in many, many, many ways, that their cars are expressions of that.”

The 51-year-old went on to speak about the series and what fans can expect from it.

The car fanatic teased there will be a lot of cars getting knocked about in the programme.

Richard went on to recall damaging a car in France when attempting to park it.

“I did some French parking, which resulted in, ahem, some damage to it,” the host admitted.

“It was weird filming that, because there were people in a restaurant watching and I went to park in a French fashion, and they didn’t know what we were doing.

“They obviously thought, ‘There’s that little fella off the telly, he’s clearly gone mad’ because I was destroying cars up and down the road.

“I ended up on my side at one point, inevitably, but we did that all in a very sort of French way.”

Richard’s co-star James has also promised fans there will be plenty of action in the upcoming series.

He explained there will still be plenty of “mickey-taking” between the three friends.

“This is possibly, by our standards, a fairly grown-up The Grand Tour, but that doesn’t really mean much, does it? It’s still, first and foremost, a bit daft.”

The Grand Tour returns on December 17 on Amazon Prime Video.