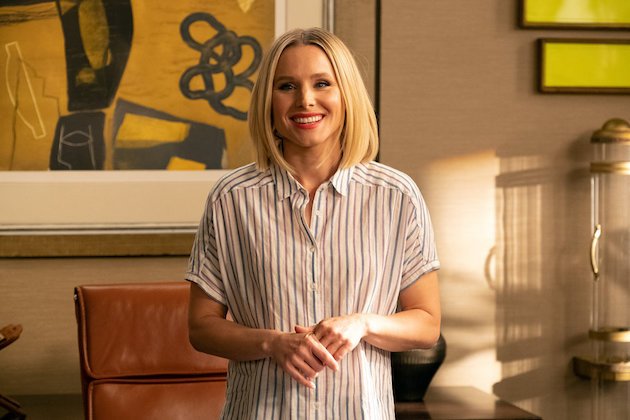 The Good Place gang is back for one final season — and their experiment to prove humanity is worth saving just hit a major snag.

Thursday’s Season 4 premiere kicks off with Eleanor gazing adoringly at Chidi as he rambles on about how great the Good Place is (look at all the big, thick philosophy books!), all the while not having a clue who Eleanor is. Michael tries to inspire her and the rest of the Soul Squad with a stirring pep talk — but at the same time, Shawn is giving a similar pep talk to his Bad Place cronies. They even sing the official Bad Place song together: that abominable “1-877-Kars-4-Kids” jingle. (See, we knew that song was cursed!) Then a new arrival plops down outside Eleanor’s office: Linda, a nice old lady from Norway… who’s utterly unfazed by the wonders of the Good Place. Eleanor tries to wow her by having Janet summon “a baby elephant made of pure light that tells you true secrets about the universe” (“Stonehenge was a sex thing!” it chirps), but an unimpressed Linda just asks for a peppermint.

The final new arrival is a nightmare jerk named Brent, who is every terrible oblivious-white-guy cliché rolled into one. (“I’m the furthest thing from racist. My dentist was a black woman!”) Eleanor deduces that Linda must be here to test Jason, because “Brent is definitely here to annoy the fork out of me.” They resolve to keep an eye on the four newbies and try to figure out what makes them tick — all except Simone, who they think they have a pretty good handle on. That is, until she starts freaking out at the orientation and trying to shake some dude’s head loose. She knows “none of this is real,” she proudly announces, and theorizes that it’s all just a hallucination produced by her dying brain. They need someone authoritative to convince her the Good Place is real — hmmm, like an esteemed philosophy professor, perhaps?

Eleanor balks at Michael’s suggestion that they introduce Simone to Chidi to get her back on track — because she doesn’t want them falling in love again, obviously — but when Simone shows up at the welcome dinner in a ridiculous outfit and starts shoving people into the pool just to see what happens, Eleanor has no choice. She brings Chidi to meet Simone, who recognizes his name from her school’s faculty list… but she’s also loudly singing “Semi-Charmed Life” to try to wake her brain up. Plus, Derek’s face appears in the sky after a jealous Jason murders him, so her hallucination hunch gets even stronger: “I’m gonna go eat a knife!” So they don’t even have a handle on Simone, it seems.

The gang makes an effort to crack through Linda’s impenetrably dull demeanor to figure her out… and get a shock when she starts punching people in the nose and kicking people flying through the sky. Yep, she’s not “Linda” at all; she’s a Bad Place demon in disguise — Chris, that hunky faux-soulmate of Eleanor’s. Michael and the gang complain to Judge Gen, who decides to punish Shawn for his devious trick: She’s making Chidi the fourth new arrival, since his brain is wiped anyway. Oh, this should make things a whole lot less complicated for Eleanor, we’re sure.

* Tahani explaining that she once talked Michael out of growing a goatee: “I lost that battle with Robert Downey Jr., and I’ll be damned if I lose it with you.”

* Michael complaining about how boring Linda is: “She makes Neutral Janet look like Disco Janet. Disco Janet was around for a while years ago. She was great. I mean, she was a lot, but she was fun.”

* Michael, on having seen doubters like Simone during his time in the Bad Place: “They’d usually come around by the third or fourth day of mouth fleas. Obviously not an option here.”

* Tahani saying her talk with Linda was the most boring conversation she’s ever had, “and this is coming from someone who once split a Xanax with Peter Sarsgaard.”

* Eleanor, after the Judge makes some lustful comments about Chidi: “All due respect, your honor: Keep it in your robe.”

* The Judge confessing that she just started watching Deadwood and “I need my daily dose of Timothy Olyphant.”