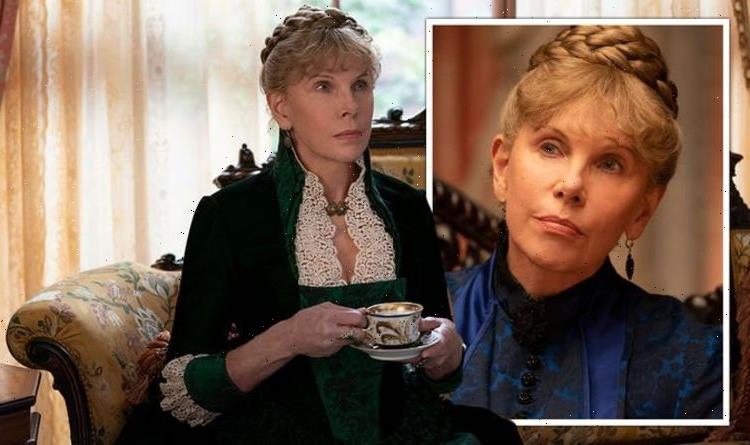 The Gilded Age has just made its Sky and HBO debut, and the series takes viewers back to New York City in the 19th century. The historical drama follows Agnes van Rhijn (played by Christine Baranski), an aristocrat trying to keep up with the changes in her flourishing community. Baranski’s real-life family featured in the series and Express.co.uk has all you need to know.

Fellowes’ latest venture explores class dynamics as the late 19th century was a period of growth and prosperity.

The character Agnes is aware of her place in the social hierarchy but Baranski said it was not a role that came naturally.

“One of the things about The Gilded Age that excited me most was that I would get to use training I haven’t used in so long because I’ve played contemporary characters,” she told Town and Country Magazine.

When the actress first met Julian, she already knew he was planning an ‘American version’ of Downton Abbey.

She ended up having a chat with him about the “Drexel family connection”.

The Drexels are introduced as a new money family in episode 10 of the series.

The connection comes through Baranski’s late husband, Matthew Cowles, with whom she has two daughters, Lily and Isabel.

Baranski continued: “I was, of course, immersing myself in research on the Gilded Age.

“And I realized more deeply how connected my late husband’s family had been.”

There is also a distant cousin, Catherine Drexel, who gave up her fortune to create a religious order.

She went on to become one of the first US-born saints canonized by the Catholic church.

The actress teased the Drexel’s go on to play a pivotal role in upcoming scenes.

At the end of the 10th episode, there is a scene where the Drexels are the first people introduced at a grand ball.

Baranski was born in Buffalo, New York and her late husband was from New York City.

Cowles died in 2014 aged 69, as a result of congestive heart failure.

His great-grandfather, Joseph William Drexel, was a partner in the firm of Drexel, Morgan and Company.

His brother, Anthony, was a senior partner. Joseph retired from the business in 1876 to focus on philanthropic work.

As for Baranski, this is the first time she has taken on a period drama.

She jumped at the chance to work with Fellowes, saying she had waited a lifetime for such an opportunity.

Liv said: “Knowing that #TheGildedAge is created by the very writer who made #DowntonAbbey I was very much excited to tune in to the premiere.

“After tuning in to the Pilot, all I can say is that Julian Fellowes really never missed because I’m already hooked.”

The Gilded Age airs on HBO in the US and Sky and the streaming service NOW in the UK.