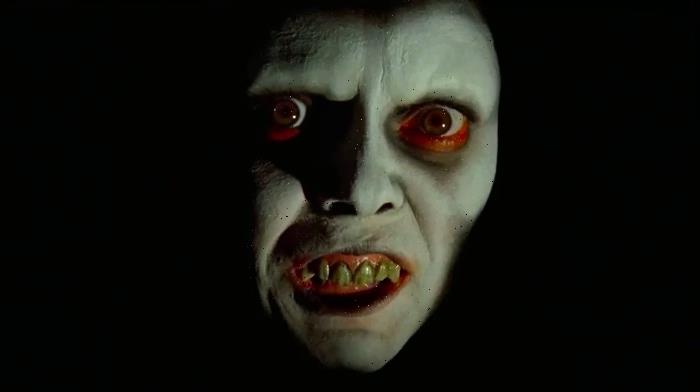 If you ask most people who (or what) was possessing poor Linda Blair in The Exorcist, the answer would probably be, “The Devil.” Folks can be forgiven for thinking this. After all, in the film, Blair’s character Regan MacNeil flat-out says she’s possessed by Satan himself. But as it turns out, that was a lie (wow, if you can’t trust demons who jump into the bodies of children, who can you trust?). There’s a lesser demon plaguing the characters of the now-iconic horror movie – and that demon actually has a name. That name: Charles! Wait, no, that’s not correct. Let’s talk about the real name.

I feel like I shouldn’t have to give you the basic gist of The Exorcist at this point, but I will anyway because I’m just that thoughtful of a guy. Directed by William Friedkin and based on the novel by William Peter Blatty, The Exorcist follows an actress (Ellen Burstyn) with a young daughter (Linda Blair) residing near Washington, D.C. for a film shoot. Mother and daughter’s idyllic life is shattered when the daughter, Regan, suddenly starts acting strangely. At first, doctors think it’s a medical issue – and then a psychological one. But as things grow more intense, and downright supernatural, the threat of demonic possession rears its ugly head.

Enter a priest, played by Jason Miller. The priest is skeptical at first, and he’s even more skeptical when the supposedly possessed girl claims she’s possessed by the Devil himself. “Look, your daughter doesn’t say she’s a demon,” the priest tells the girl’s mother. “She says she’s the devil himself. And if you’ve seen as many psychotics as I have, you’d know it’s like saying you’re Napoleon Bonaparte.”

Still, the priest grows more and more convinced of actual possession and the church brings in another priest with experience with these matters. When the film begins, we actually meet that priest, played by Max von Sydow. He’s working on an archeological dig in Iraq, and while there he uncovers a sculpture carved to resemble a specific demon. More on that later!

The two priests perform an exorcism – one so dangerous and extreme that it costs both of them their lives. But the little girl is exorcised and she and her mother leave town.

Remember that sculpture I mentioned? The one that Max von Sydow uncovered in Iraq? That figurine – and a much larger one von Sydow also encounters – holds the answer to what’s really possessing Regan. The statue is meant to represent Pazuzu, often represented as an imposing figure with the head of a beast, the body of a man, a pair of wings, a scorpion’s tail, and, uh…a snake-shaped penis.

In Blatty’s book, Pazuzu is name-dropped – but no one ever bothers to say that name in the film. The only names we get are “Captain Howdy,” a “spirit” Regan says she contacted with an Ouija board, and the aforementioned moment where Regan claims she’s possessed by the Devil himself. Blatty’s version of Pazuzu is drawn from a demonic figure from Assyrian and Babylonian mythology, which considers Pazuzu to be the “king of the demons of the wind.”

In mythology, Pazuzu is bad news – such bad news that he actually scares away other demons. And while being associated with wind doesn’t sound that scary, the legend states that Pazuzu was “in control of the west and south-west winds which brought famine during the dry season and, in the rainy season, tearing storms and locusts.” Blatty took all these ideas and dropped them into Catholic iconography for the purposes of his book. Also, according to Mesopotamian scholar Stephen Bertman, Pazuzu “is the only Mesopotamian demon to star in a movie.” Good for you, Pazuzu! You did it!

Based on a True Story

Believe it or not, The Exorcist was inspired by a true story. In 1949 there were various newspaper reports about a 14-year-old boy known as Robbie Mannheim who was allegedly possessed by demonic forces. The general consensus today is that Robbie was emotionally and mentally disturbed, not possessed. But back in ’49, the Roman Catholic Church was convinced enough to order a series of exorcisms performed on the boy.

Back in 1949, Blatty was a student at Georgetown University, and he read about the exorcisms in a local newspaper. Blatty filed the knowledge away in his brain and drew on it 20 years later when he wrote The Exorcist. Nothing in the true story mentioned Pazuzu, though. That was an idea Blatty came up with on his own. Blatty first observed a statue of Pazuzu similar to the one used in the movie at a museum in Mozul, Iraq.

“I not only read [about the real exorcism], but I heard some details of the exorcism in my New Testament class at Georgetown. 1949. The teacher was Eugene Gallagher,” Blatty said years later. “Like so many Catholics, I’ve had so many little battles of wavering faith over the course of my life. And I was going through one at that time. And when I heard about this case and read the details, that seemed so compelling. I thought, my God, if someone were to investigate this and authenticate it, what a tremendous boost to faith it would be. I thought, someday I would like to see that happen. You know, I would like to do it.”