“Lingua Franca” opens with a phone call from across the ocean: A distant voice speaks plaintively in Tagalog over austere shots of a bleak Brighton Beach, a groggy woman awoken by her mother’s nagging in her mother tongue. This is Olivia, who works as an in-home caregiver to a deteriorating Russian woman named Olga (the late, great Lynn Cohen). Olivia is played with graceful fortitude by Isabel Sandoval, who wrote, directed, produced, and edited the film. She’s already built a name for herself in Filipino cinema, with her work screening in top film festivals like Venice and Locarno.

“Lingua Franca” is Sandoval’s third feature, which made its world premiere at Venice Days and was the first Filipino film to be featured in the main competition at BFI London in its 63-year history. With a Netflix debut courtesy of Ava DuVernay’s ARRAY Releasing, “Lingua Franca” is poised to introduce the emerging auteur far and wide.

Wrenching and provocative, “Lingua Franca” tells Olivia’s story with a sensitivity and specificity that could only emerge from an authentic lived experience. As an undocumented trans woman living in the U.S., Olivia works diligently to make enough money to send to her mother as well as the American man she is paying to marry her. In her hard-won solitude she makes time for eroticism and fantasy, allowing a potential connection with Olga’s bad-news grandson Alex (Eamon Farren) to infiltrate her typically private world. Olivia’s solo scenes are some of the film’s most sensual, and most revelatory. We see her dilating, masturbating, and eventually consummating her blossoming romance. It already feels revolutionary to see a trans woman experience such pleasure onscreen — even more so knowing it’s being lensed entirely on her own terms.

“I wanted to show scenes where someone like myself, a transgender person, is letting themselves experience sensuality, with or without other people, and let the audience soak it in and see that character experiencing that pleasure,” Sandoval said during a recent phone interview. “Her fantasy is kind of a central theme, and I wanted to have a trans female gaze throughout that.”

Sandoval emphasized that trans films by trans filmmakers will and should feel different than those made by cisgender filmmakers. She doesn’t diminish the transition narrative, but is proud that her film begins where most mainstream trans films end. 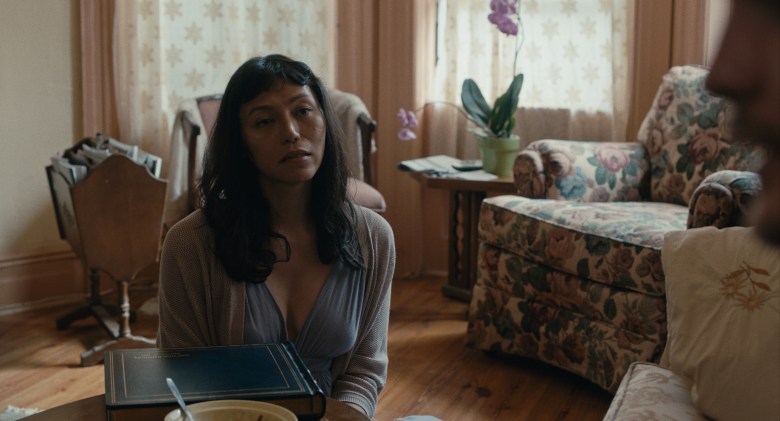 “There’s a tendency or temptation for stories like this to just see a character like Olivia as her labels, as the different intersectional aspects of that identity,” said Sandoval. “We see her just as a person, we see that sensuality and conflict. She’s not perfect; she’s a character who’s flawed, and she’s complicated. She’s human and I think ultimately that’s what makes her relatable as a character.”

Much of that holistic approach comes from Sandoval’s sensitivity as a filmmaker, but also the simple fact that she inhabits these intersectional identities. It makes sense that it’s easier for her to view a character she has so much in common with as fully human and complex. Couple that with her passion for cinema and impressive autodidactic approach to filmmaking, and you get a quiet masterpiece like “Lingua Franca.”

“It was a conscious decision for me not to go to film school because I tend to be an independent thinker. I don’t like to be taught what to think,” she said. “I wanted to have free rein on my sensibility as a filmmaker, and I did that by exposing myself to different kinds of cinema and films that I could get my hands on. I think my sensibility evolved watching those films and making my own films myself.”

In true auteur fashion, Sandoval is practically a one-woman-band: She wrote, directed, produced, starred in, and edited the film. She began her film career as an editor, which she sees as the most important element of shaping her films. 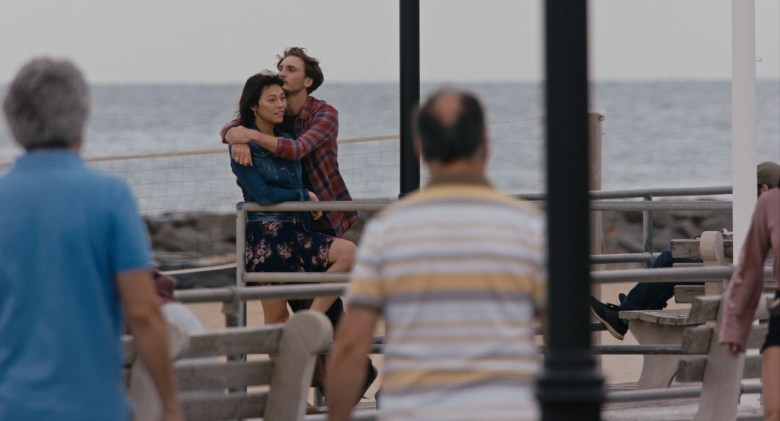 “If there’s one role on the film I would never give up, in that it’s the most decisive in the final outcome, it’s as an editor,” she said. “I do all those other things so I know exactly what to edit and what I want to include or not include. Editing is just finding the film in post; it’s ultimately in editing the film that you shoot and sculpt it to what you want it to be.”

Though she’s a magnetic presence onscreen, she says acting is just a means to an end. Rather than see directing herself as a challenge to overcome, she views it as one less outside factor to worry about.

“I think of it as one less person to direct. For writer/directors, the main protagonist is usually kind of a double or the psychological alter ego for the creator, so it made sense to me to inhabit someone like Olivia,” said Sandoval. “The work is not autobiographical, but we are both Filipina trans women, immigrants in the U.S. So it made send for me to inhabit in front of the camera the fullness that I had written. I don’t necessarily think of everything I did as different jobs. I have one job which is to tell a story and make a film, and that has many aspects to it.”

“Lingua Franca” is presented by Ava DuVernay’s ARRAY Releasing distribution collective, which amplifies the creative voices of people of color and women of all kinds. “Lingua Franca” will open in select cinemas and be available to stream on Netflix on Wednesday, August 26.