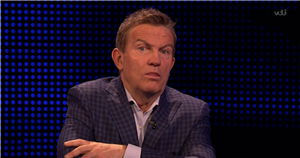 The Chase viewers were distracted on Thursday afternoon as contestant Emma tried her luck on the ITV quiz show.

Host Bradley Walsh welcomed four new contestants to the studio and was eager to see them get through to the final with some money in-hand.

Anne Hegerty aka The Governess was in the hot seat trying to prevent the hopefuls from going home with the cash prize.

Richard, Emma, Mary and David all took it in turns to take on the cash builder and later went head-to-head with The Governess in an intense round of general knowledge questions. Civil servant Emma was the third person to take on the tough cash builder round.

However, viewers were distracted by the contestant's appearance.

Taking to Twitter, one fan penned: "I need a full breakdown of Emma's skincare routine cos I wouldn't have even said 26, let alone 36."

She only managed to answer two questions correctly in the cash builder round, earning her a total of £2,000.

Emma was then given given three options by Anne at the start of the Head-to-Head round.

Emma decided to stick with the £2,000 and tired her luck against Anne in a series of general knowledge questions.

The questions were not on her side and she was sent packing after being caught by The Chaser.

Fans at home rushed to their keyboards to send support to Emma as they pointed out the questions were difficult.

One fan tweeted: "I feel sorry for Emma. Tough questions in the cash builder and at the table."

A second person wrote: "Awww Emma.. I was routing for ya Hun."

While a third social media user said: "To be fair to Emma the Q were more difficult then normal."

"Tough set of questions for poor Emma in this show," another added.

Richard and Mary were the only two contestant who made it through to the final chase.

The duo set a tremendous target of 21 for The Governess to catch and Bradley was convinced his team had it the bag.

However, it was another day in the office for Anne and she caught Richard and Mary with seconds to spare.

The Chase airs weekdays on ITV at 5pm