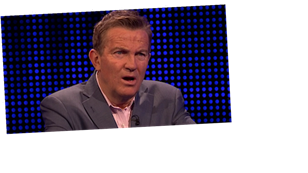 The Chase viewers were left with their jaws on the floor during the latest instalment of the ITV quiz show on Tuesday afternoon.

Host Bradley Walsh welcomed four new contestants to the show and he was eager to see them get through to the final with some money in-hand.

Paul Sinha aka The Sinnerman was in the hot seat trying to prevent the hopefuls from going home with the cash prize.

Pablo, Frankie, Veronica and Jordan all took it in turns to take on the cash builder and later went head-to-head with The Sinnerman in an intense round of general knowledge questions.

ITV viewers were distract during tonight's show as contestant Frankie revealed her age at the top of the show.

Taking to Twitter, one fan penned: "Frankie’s 39?! Bl***y hell I need to know her skincare regime."

A second person posted: "She is not 39. She looks a lot younger!"

While a third gushed: "Frankie 39. She looks fantastic."

Before Frankie got the chance to take on the tough quiz show, Bradley quizzed her on what she'd do with the prize money if she was lucky enough to win any.

She told the presenter that she'd like to put it towards her wedding and that she'd already booked the venue and picked her dress.

However, Frankie later added that boyfriend Adrian is yet to propose to her.

Bradley was left gobsmacked at Frankie's admission and viewers at home rushed to their keyboards to share their views.

One confused fan tweeted: "Frankie has a wedding venue and a dress but isn’t engaged.?"

Another added: "Frankie planning her wedding even though her current boyfriend hasn't proposed."

A third social media user quipped: "She's bought a wedding dress and booked a venue but he hasn't actually proposed?"

While a fourth said: "Imagine planning your wedding without even being engaged."

TV legend Bradley, 61, stepped in to help Frankie get the proposal from her partner.

He asked Frankie: "What's his name?"

Starring into the camera, Bradley said: ""Aiden, come on get moving that."

Frankie scored a sound £5,000 in her cash builder round and told Bradley that she was disappointed in her performance.

However, she had the chance to gamble the sum of money for. greater amount in her head-to-head round with The Sinnerman.

She decided to take a risk and take the high offer of £30,000 placed on the table by the quiz champion.

Despite getting off to a good start, Frankie was eventually caught by Paul and was therefore sent home empty handed.

The Chase airs weekdays on ITV at 5pm