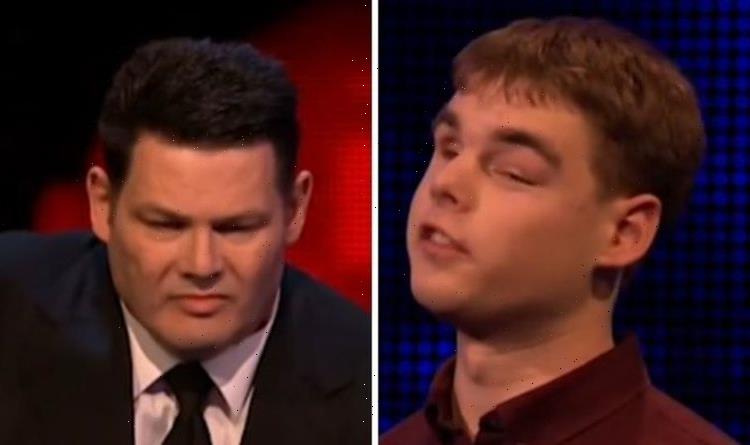 The ITV game show The Chase hosted by Bradley Walsh returned on Monday evening, with four contestants stepping up to take the challenge. Jen, Josh, Phil, and Lesley came face to face with Mark Labbett, but fans were outraged when blind student Josh was given ‘unfair’ questions.

Josh was the second contestant to take on ‘The Beast’, Mark Labbett, where he managed to build £5,000 in the first round.

Bradley asked Josh his first question: “At the start of a snooker frame which ball is placed furthest from the player?”

Josh’s three choices were pink, black, or blue, with Josh answering pink but admitting he didn’t know much about snooker.

The correct answer was black, with The Chaser getting the answer correct moving one step closer to Josh.

Mark managed to catch up to Josh very quickly and was soon just one question away from getting him out of the last competition.

Josh was asked the last question: “In December 2019, which of these was a piece of art priced at around 120,000 dollars at Art Basil, Miami beach.”

The options were banana taped to a wall, apple nailed to the floor or pear stapled to the ceiling, with Josh going for the second option.

He admitted he had no idea what the answer was, with it soon being revealed that it was banana taped to a wall.

Bradley turned to fellow contestant Jen and asked: “Is he going to know it?” with Jen quickly joking, “It’s a question about food, so he probably does.”

The questions are believed to be chosen at random and with eight question writers from all sorts of backgrounds in charge of the topics.

The Beast chose the correct answer, which meant Josh was out of the competition, however, fans rallied together in support of the student as they felt the questions did not take into consideration his visual impairment.

One said: “To all the naysayers and doubters who say this hashtag is mean, this is one of those rare moments where we all pull together in support of one cause. Tonight, the cause was Josh, a great contestant who was unlucky with the questions. Well, done, Twitter. #TheChase.”

Josh had explained at the start of the programme how he studied Physics and Astrophysics, saying that for a blind person it can be quite a challenge.

Meanwhile, another said: “Brutal set of questions for Josh on The Chase then, wanted him to win big too!”

Contestants Jen and Lesley were left to take on the Chaser in the final moments, bringing in a huge £60,000 after Jen battled it out to win £56,000 against Mark.

Jen was a huge hit in the hot seat, being quick on the buzzer and getting herself and Lesley a huge lead of 20.

However, their luck soon changed when Mark Labbett managed to catch up to them with just four seconds to spare, even after they managed to push him back one.

The Chase airs weekdays at 5:35pm on ITV.