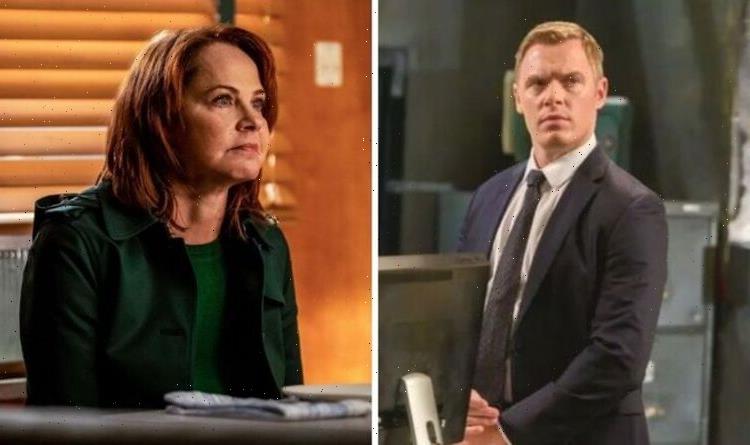 The Blacklist returns on Friday on NBC

NBC’s thrilling series The Blacklist saw the return of Cynthia Panabaker (played by Deirdre Lovejoy) in the most recent episode and it looks as though she could be staying with the task force a while longer. After the promo for the upcoming episode was released fans believe she could help Ressler (Diego Klattenhoff) take down Cooper’s (Harry Lennix) blackmailer.

The most recent episode of The Blacklist titled ‘Eva Mason’ saw Panabaker’s return for the first time since the 12th episode of season eight.

Despite her position as the United States Senator, she reconnected with the task force after her daughter in law went missing.

Although the storyline was resolved, a first look photo from the upcoming episode showed Panabaker having a heated conversation with Ressler.

As a result, viewers were convinced she had decided to stay to help the team find Cooper’s mysterious blackmailer.

Throughout season nine, Cooper had been the victim of blackmail which all began when someone tried to frame him for murder.

The agent had woken up in his garage with no recollection of the night before, then realised a round was missing from his service gun.

He soon found out his neighbour was found dead, and with a bullet missing all the hints were pointing at him being the culprit.

Especially seeing as people would believe he had motive, as his wife and the deceased neighbour once had an affair.

After confiding in Lew Sloan (Danny Mastrogiorgio) it was soon determined Cooper was drugged.

The pair were also able to track down a woman who provided information which helped him get a step closer to proving his innocence.

Cooper also discovered a New York police detective was responsible for paying the bartender to spike his drink.

With no idea as to why an officer would want to frame him, fans also predicted Panabaker could be behind the blackmailing.

Taking to Reddit, Bthompso43 responded to a post about the blackmailing storyline and wrote: “I’m betting it’s Panabaker.”

While another noted: “This person or organisation needs to know some key things, or be able to have found them out”, and highlighted the blackmailer knew about: “Charlene’s affair with Doug, Red’s relationship with the FBI and task force (highly classified), Harold Cooper as leader of the task force (also classified).”

Although the obvious choice would be Panabaker, fans know The Blacklist is unpredictable and often has unexpected twists.

With the senator staying put and appearing to be in a heated discussion with Ressler perhaps they’re trying to figure out who the mysterious person could be.

As the series continues, there will undoubtedly be more clues and perhaps the introduction of new characters who could help prove Cooper’s innocence.

Fans will have to stay tuned to see how Panabaker will contribute to the investigation and if they will be able to expose the blackmailer.

The Blacklist is available in the US on NBC. A UK release date has yet to be announced.