EXCLUSIVE: Acclaimed author Daniel Woodrell’s The Bayou Trilogy crime novels is getting a TV series adaptation. Carl Beverly and Sarah Timberman are developing and producing the project via their Timberman-Beverly Productions banner. It is one of the first high-profile shows under the overall deal the duo signed with Lionsgate Television last year. 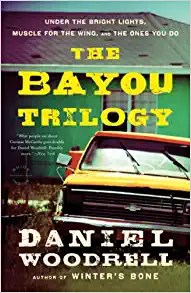 The Bayou Trilogy: Under the Bright Lights, Muscle for the Wing, and The Ones You Do chronicles business-as-usual corruption in the fictitious Louisiana parish of St. Bruno. In the eye of the storm stands Detective Renee Shade, whose sense of duty collides with a violent underbelly of Dixie Mafia, ex-cons, dirty cops, and political grifters, along with pesky personal demons and a web of family entanglements.

“Daniel Woodrell is a brilliant storyteller, wordsmith and poet, and his books are a master class in character, crime fiction and the South,” said Beverly. “He plunges readers into the murky depths of his characters’ lives, often revealing ugly truths, then quickly derails any premature scorekeeping by peeling back the layers of their humanity and emotional turmoil. We’ve chased Woodrell’s Louisiana opus for over a decade and are thrilled to finally bring these audacious, genre-defining novels to television.”

The genre is familiar terrain for Beverly and Timberman, who produced FX’s Southern crime series Justified, based on the Elmore Leonard short story Fire in the Hole. They’re currently working on a reunion season of the series to be adapted from the Elmore Leonard novel, City Primeval: High Noon in Detroit.

Woodrell’s novels often has been compared to Leonard’s work, with LA Times’ review of Muscle for the Wing saying that “Woodrell does for the Ozarks what… Elmore Leonard did for Florida.”

The Bayou Trilogy marks the second adaptation of Woodrell’s work by Lionsgate. On the film side, the indie studio produced and distributed the Oscar-nominated adaptation of his novel Winter’s Bone starring Jennifer Lawrence. Woodrell is also known for his novel Woe to Live On, adapted into the Ride with the Devil film, directed by Ang Lee; as well as Tomato Red adapted by Irish writer and director Juanita Wilson.

Beverly and Timberman executive produce The Bayou Trilogy. Jocelyn Sabo is overseeing the series for Lionsgate.