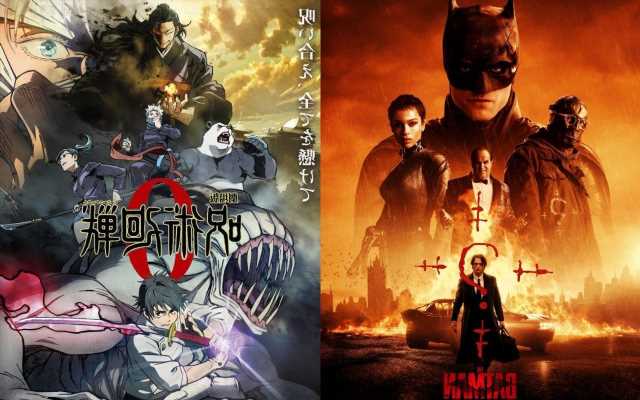 The Matt Reeves-directed superhero movie crosses $300 million domestically in its third week, while the animated movie adaptation of the manga series surpasses industry expectations on its first weekend.

AceShowbiz -“The Batman” continues to rule the box office three weeks after its release. The newest reboot of the DC superhero film franchise still tops the North American chart with an additional $36.8 million for the weekend, according to studio estimates on Sunday, March 20.

The amount brings the movie’s domestic gross to cross $300 million mark ahead of projections. It is still the highest-grossing movie of 2022 and the second highest during the pandemic, behind “Spider-Man: No Way Home” which debuted in late 2021 and has grossed nearly $800 million so far.

While the Robert Pattinson-starring movie is still unchallenged at No. 1, “Jujutsu Kaisen 0: The Movie” makes a surprising debut this week after it launched to an estimated $17.7 million at No. 2, surpassing the industry expectations at the range of $8-13 million.

The movie adaptation of the manga series confirms the increasing popularity of Japanese anime after “Demon Slayer the Movie: Mugen Train” opened to $21.2 million last year despite reduced capacity at theaters due to the pandemic. Critics also approved it, as the movie earns a rare 100% fresh rating on Rotten Tomatoes.

“This is a terrific opening,” says David A. Gross, who runs the movie consulting firm Franchise Entertainment Research. “Reviews are exceptional for this and for all of Funimation/Crunchyroll movies. They have not missed.”

Gross sees the modest debut as a win for the production house and distributor, explaining, “Horror is not expensive to make – clever cinematography, editing and sound design go a very long way. ‘X’ should recover its costs and make a few dollars after all ancillary money is counted.”

Meanwhile, “Uncharted” slides to No. 3 with an additional $8 million for a current domestic gross of $125.9 million. Channing Tatum‘s “Dog” is also pushed down one place to No. 5 with approximately $4.1 million.