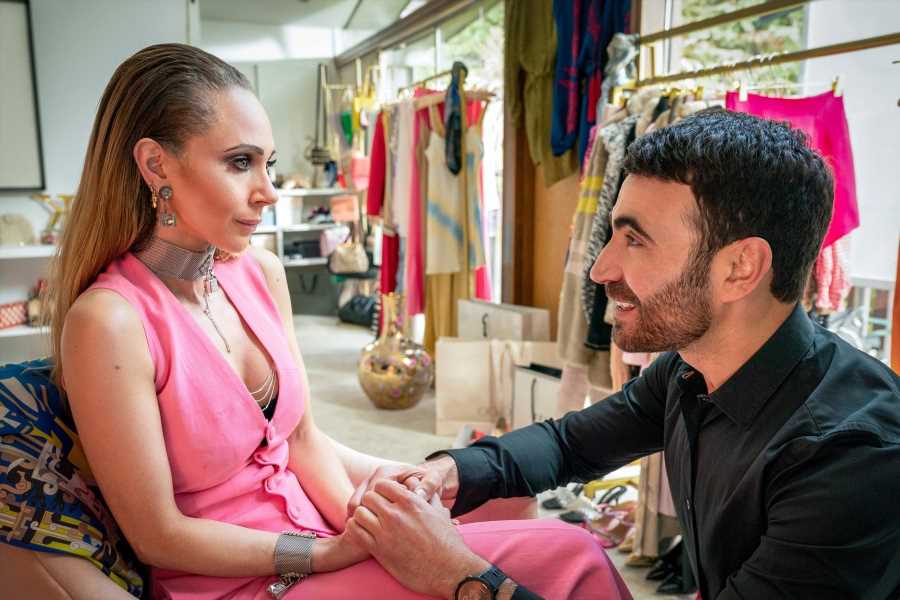 A review of this week’s Ted Lasso, “Midnight Train to Royston,” coming up just as soon as you make my eyebrows less crazy…

Midway through “Midnight Train to Royston,” Rebecca enters Ted’s office to tell him about her affair with Sam. After Ted makes the obligatory Cheers joke(*), he advises her to follow both her heart and her gut on the matter, then observes that it was roughly this time last year when she came into the same room to confess her true motive for hiring him to coach the team. “See you next year,” Rebecca quips before walking out the door.

(*) Pedant alert: It’s a technically incorrect joke, since that Sam and Rebecca were never actually a couple, even though they slept together a few times and briefly planned to have a child together.

Alan Sepinwall: How Do You Solve a Problem Like the 2021 Emmys?

50 Best Action Movies of All Time

The exchange is meant to draw a parallel between the arcs of Season One and Season Two, and perhaps as a meta commentary on how television shows often repeat themselves. But in inviting us to consider where things stand at the penultimate installment of this season versus the last one, the scene marks the first time I’ve found the comparison unflattering to the new episodes.

Rather than rehash the show’s original Major League plot — or, worse, attempt to recreate the plot of Major League II — showrunner Bill Lawrence, Jason Sudeikis, and company instead opted to do something different and challenging with the new season. With everyone on the same page and no obvious external villain, this year has been devoted to introspection and internal struggles, all of them testing the limits of Ted Lasso’s power-of-positivity ethos. Dr. Sharon forced Ted to confront memories of his father’s suicide; Roy struggled to find direction in retired life; Nate tried to be more assertive and instead just turned into an asshole; on and on. It’s been an emotionally richer season, and often a funnier one, and the creative team should be commended for trying something new.

But it’s also been a narratively messy season, and not always in ways that seem intentional. Characters and story arcs appear and disappear abruptly. Dr. Sharon essentially fixed Jamie’s whole personality in a single off-screen session; then he was largely absent until the Man City game, where he showed up as a phony obstacle in Keeley and Roy’s relationship. (More on that in a bit.) The show has at times leaned into the idea of Nate’s dark side; at others, it’s treated him as the same endearingly clumsy underdog he was when he had Will’s job. Sam’s protest against Dubai Air wound up having zero negative consequences for anyone, which diminishes the stakes of him having taken the stand in the first place. In hindsight, it just happened to set up romantic tension between Sam and Rebecca, which the show for the most part hasn’t handled well at all. The writers seem wildly uninterested in exploring the reasons it is unfair for someone as powerful as Rebecca to date a young subordinate like Sam. A lot of what happens in “Midnight Train to Royston” illustrates that very danger, yet Rebecca’s attempt to manipulate Sam out of taking this potentially life-changing opportunity — courtesy of Ghanian billionaire Edwin Okufu, winningly played by Veep alum Sam Richardson — is presented as entirely charming and something we should root for. 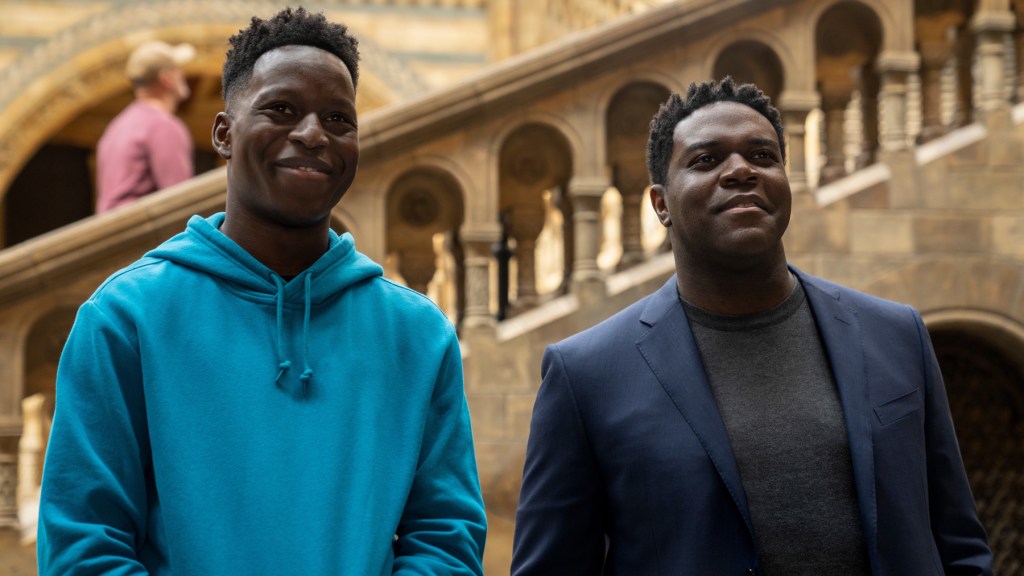 And boy, is the Keeley and Roy drama this week a problem. It all starts with Nate, whose fragile ego can’t stand the hypothetical notion of Ted taking credit for his latest tactical brainstorm, and who’s come to resent people mentioning that Ted bought him his snazzy grey suit for Rebecca’s fundraiser last season. So, he asks Keeley to help him buy a new suit that will be all his own. But drunk on both whiskey and anxiety, he misinterprets Keeley’s upbeat, encouraging vibe as an invitation for a romantic overture, and kisses her. Realizing how badly he’s misread the situation, he retreats to the dressing room and — as he has done throughout the season when managing his darkest impulses — spits on the mirror.

Keeley agrees to take Nate shopping in part because she needs a killer suit herself, for a Vanity Fair photo shoot celebrating her work as a young businesswoman. This is both a thrilling and terrifying opportunity, because it recognizes her for something other than her looks, but leaves her open to be judged for something more important than her looks. When Keeley admits to Roy her fears about people judging the real her, he says the perfect thing (as he so often does): “The real you is fucking amazing. And now the whole world is going to get to see that. You are Keeley fucking Jones, the independent woman. You’re gonna kill it.” Minutes later, when she tells him about Nate’s kiss, his response is even better, focusing entirely on how awkward that must have been for her rather than expressing anger toward Nate for trying to get with his girlfriend. Between the two answers, it could not be more clear how unbreakable the foundation of Keeley and Roy’s relationship is, even if the surface aspects, like Roy’s eyebrows, sometimes require work.

But then Roy has a confession of his own, about the three hours he spent chatting with Phoebe’s teacher  — not even really flirting, though it may have felt that way to Miss Bowen — and how when she asked if he was married, he said no and did not elaborate to mention his live-in girlfriend. That, in turn, prompts Keeley to belatedly tell Roy about what Jamie said to her at the funeral, and suddenly we are supposed to look at their relationship as anything but solid.

It is, to be blunt, nonsense. As Roy himself seems to understand, it is not Keeley’s fault or responsibility that Nate impulsively kissed her. But it’s also not her fault that her ex-boyfriend is still hung up on her. That she did not instantly tell Roy about the conversation surely has less to do with any lingering feelings she may have for Jamie than with her not wanting to upend team chemistry, especially so soon after Roy and Jamie’s memorable hug in the Wembley locker room. And, again, Roy Kent has been written throughout the series as a man who is both enlightened and secure enough to not feel threatened by any of this. So one of two things is happening here: 1) The show is about to break up Keeley and Roy despite overwhelming evidence that things should be just fine between them; or 2) The show is trying to gin up some phony conflict at the end of the season that will be resolved in the finale, once everyone remembers that these are not stupid people and they understand one another deeply. Neither option seems good, and the story in general seems emblematic of some of the shortcuts the show has taken this season.

Nate’s story eventually weaves into the episode’s most successfully executed subplot. Ted has been preparing an elaborate farewell party for Sharon, including devoting precious practice time — when the team is one win away from earning promotion back to the EPL, no less — to getting the players to master NSYNC’s “Bye Bye Bye” dance. When he discovers that Sharon has instead left early, all of Ted’s abandonment issues kick in, and he goes to confront her at her corporate apartment. In a lovely scene, Sharon insists that she’s terrible at saying goodbye and pleads with an indignant (and, in the moment, extremely childish) Ted to read the letter she wrote him. Ted, already disarmed by her acknowledgment that he has made her a better therapist by forcing her to recognize the value of expressing her vulnerabilities to her patients, finally opens up the letter and is almost instantly overwhelmed by the sentiments expressed within it. It’s a very nice touch that we do not actually see or hear what she’s written, because the way Jason Sudeikis plays Ted’s reaction — and, just as importantly, the way Sarah Niles plays Dr. Sharon watching Ted react to the words she wrote — says all we will ever need to know about how much these two have come to mean to one another.

Ted and Sharon wind up enjoying a fun evening together at Mae’s pub, before Ted turns the tables on Sharon and slips out while she’s distracted by the three Richmond fanboys. But when he gets home, he discovers that the lesson he taught Sharon about expressing vulnerabilities can have professional consequences. Trent Krimm of The Independent texts to warn him about a scoop he’s publishing about the panic attack Ted had at the end of the Tottenham match. And, without prompting(*), he then adds that Nate was his source.

(*) This is also a shortcut, as I can imagine a circumstance where Trent Krimm of The Independent would burn his source if Ted asked, but not unsolicited, and not in any way that would leave evidence that could scuttle his own career. But I’ll allow it because this is not a show about what it’s like to be a beat writer covering a middling-at-best football club.

This, at least, feels like a conflict that has more or less played out fairly and effectively over the course of the season. We can argue about how Nate’s behavior has modulated from one episode to the next, but it’s been clear throughout that he’s been wrestling with a desire for more attention and respect from his expanded role in the organization. And one of this year’s key themes has been the question of whether Ted’s cheerleading can sometimes do more harm than good. Roy successfully argued that Ted had made Jamie into a worse player, and Richmond as a team was struggling mightily until Roy joined the coaching staff and started glaring at everyone. Now we have Nate, who was one of the great success stories of Ted’s generosity and encouragement a season ago, doing something unforgivable by revealing private, sensitive mental-health information about a colleague — and, as Ted thought, friend — to a member of the press. It’s a story I’m excited to see pay off in the finale. The other conflicts advanced by “Midnight Train to Royston,” much less so.