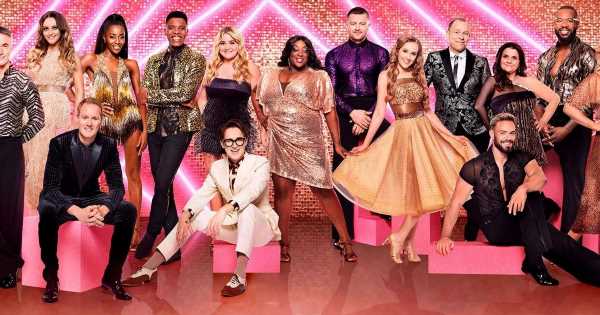 Strictly Come Dancing fans were celebrating on Saturday night, as the hit BBC dance competition returned to our telly screens.

The festivities kicked off with the official launch show, which sees each of the 15 celebrities paired with their professional dancer counterparts.

The show was once again hosted by Claudia Winkleman and Tess Daly, with the judging panel for this year made up of Craig Revel Horwood, Shirley Ballas, Motsi Mabuse and Anton Du Beke.

Kicking off the festivities this year were the Strictly pros with a dance number of their own – as host Claudia rode in on a glittery cannon.

The first dance pairing to be announced was comedian and Peep Show star Robert Webb, meanwhile, has been matched up with Dianne Buswell.

His first dance will be the Cha-Cha-Cha to Rasputin.

Next up was Coronation Street and Hollyoaks icon Katie McGlynn, meanwhile, will be dancing with Gorka Marquez, in what’s sure to be a very spicy pairing.

Katie previously vowed to pro dancer Giovanni Pernice’s current girlfriend Maura Higgins that she doesn’t plan to succumb to the Strictly ‘curse’ with the dancer – but even so, it might be a relief to see Katie alongside Gorka instead.

Previous reports have linked she and Giovanni together – but she insisted to The Sun that she doesn’t "really know him".

She explained: "Giovanni is a really nice guy but I don’t really know him", telling Maura that there is "nothing to worry about" in regards to any potential romance rumours.

Katie added at the time: "I would never get involved with anyone that had a girlfriend.

"I understand that happens but I'd avoid that like the plague. If someone has a partner, they are completely off-limits. I never want to be that person."

CBBC presenter Rhys Stephenson was then matched with Nancy Xu.

He said he is "so excited" to work with her.

"This boy is gonna be working so hard!" Nancy teased as the two shared a bop together – as Rhys added that he "immediately imprinted on her like a baby duckling".

Dragons’ Den investor Sara Davies was up next, looking almost unrecognisable from her boardroom persona in a sparkly pink dress.

Sara was placed with Aljaž Škorjanec.

"I really love people who are committed and driven," he said of his new partner.

It came after Dan hinted he could quit BBC Breakfast while rehearsing for Strictly.

She brought an interpreter along with her to help her out on the show, who will sign to her throughout the process.

She said she'll be using beats and counting to feel the music as she dances – and her first dance will be the jive.

It was The Crown actor Greg Wise's turn next, as he was placed with Karen Hauer.