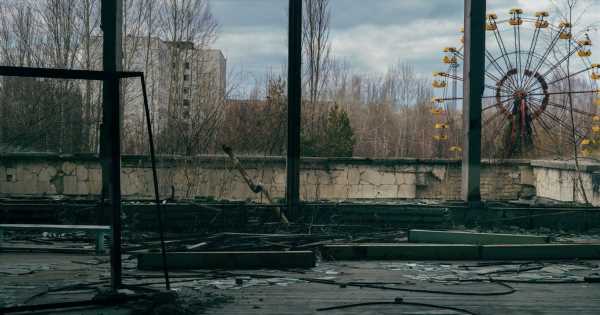 Once bustling hubs, prosperous, full of families, noise and every day life, they have now been left to Mother Nature's clutches.

Floods, landslides, nuclear disaster, war and a huge underground blaze drove people from their houses and to flee the places they had called home.

But where they once lived, laughed, went to school and work and enjoyed themselves has all been frozen in time.

New documentary, Abandoned Engineering, takes a look at what drove people to leave everything they had ever known – and it the towns will ever be populated again.

Everything looks as though it has been fossilised, children's playgrounds sit half submerged underwater while swimming pools, cafes and homes lie abandoned.

The once bustling tourist town now has just one resident, 88-year-old Pablo Novak – and he says he will never leave.

He said: "I stayed because I was sure someone would come back.

"When I turned 70 my daughters gave me money because they thought I couldn't live here any more but I'm now 88 and I'm still here.

"As long as I can still walk, talk and I've got my memories, I will stay here."

Just 50 years ago Villa Epecuen was a luxury resort with 20,000 people flocking there from Argentina's capital Buenos Aires every year.

The bustling town had everything a resort could need, – swimming pools, theatres, playgrounds and hotels.

And the crowds were drawn by the hot springs Villa Epecuen was built next to.

Famed for their healing powers and rumoured to be able to cure anything from depression to arthritis , these 'miracle' waters would eventually be the town's downfall.

The waters of the lake began to rise and rise and when it reached record levels those living there had no choice but to flee.

By 1993 the whole of Villa Epecuen was under 30 feet of water and has been described as a "modern day Atlantis".

Eventually, the floods started to receed but what was left behind was just as eerie.

All of Villa Epecuen was covered in layer upon layer of salt.

Other than Pablo, who has never left, no one has ever returned to Villa Epecuen and the town will remain abandoned forever.

In an area known as Italy's Bad Lands, there is a huge expanse of unpopulated plains.

For as far as the eye can see there is nothing.

But 1,300 feet above the valley something very unexpected can be seen – a town that looks like it's been carved into the face of the rock.

This is Craco, a village dating back to medieval times but which had to be abandoned in 1963 after standing above the landscape for almost 1,000 years.

The oldest buildings are the only ones that still stand proud on the skyline and the town has become a tourist curiosity and even a film set.

But the newer buildings have disappeared, erased from time – and the whole catastrophe is down to the people who lived there.

As the ancient fortress and town grew in affluence more and more people began to move in.

Merchants arrived in the 15th century and started building their homes not into the rock of the hills but into the clay soil lower down the slopes.

The town had always been plagued by landslides and by the 1960s these had become a serious problem.

Desperate to prevent the town from being wiped out, a concrete reinforced wall was built to protect the town – this proved to be disastrous.

Earth scientist Professor Dougal Jerram said: "This was self-inflicted and they had reinforced the area with concrete, which was heavier and required drilling, which sped up the landslides.

"Leaking pipes and sewers was adding to the other water that was feeding the landslides.

Despite this, the final family remained in Craco until the 1990s, when they finally packed up and left.

When it was built, Pripyat was a showpiece city, a dream town – busy and bustling with families.

The average age of those living there was just 26 and was home to tens of thousands of people.

The reason for its existence – the nearby Chernobyl nuclear power plant.

Echoes of the reason for the creation of the stunning town still litter the now abandoned streets, which have been almost reclaimed by nature.

A huge logo – the motto of the town – 'Let the atom be a worker rathern than a soldier' did not follow through.

On April 26, 1986, the number four reactor exploded in the worst nuclear accident the world has ever seen.

Much of Europe was covered in dangerous radiation and those living in close-by Pripyat had to flee for their lives.

It still lies derelict with chilling reminders of those who had made the dream city their home.

Cars remain in the streets, many of the homes still contain furniture, now heavy with dust and decay.

School books, desks and chairs have remained unused for decades.

Former soldier Sergey Chernov said: "It was dangerous to build a town in the vicinity of a nuclear plant but that was common practice.

"The cost to Pripyat proves how disastrous that was."

In the middle of the desert in south western Africa, out of the sands emerges a ruined and abandoned town.

Bath tubs are filled with sand, there are piles of sand in each of the houses and the only living things are snakes and scorpions.

But this was once a thriving and affluent town.

Scores of Germans flocked to Kolmanskop in the early 1900s, driven by one thing – diamonds.

Professor Dougal Jerram said: "They dug trenches and there were so many diamonds that they could sweep the sand up and collect huge numbers with their hands."

The town had its own ice factory, butchers and the shop keeper was the richest woman living there as she struggled to keep up with the demand for fine cheeses and the very best Champagne.

Kolmanskop was the first place in western Africa to have an X-Ray machine but this wasn't just for broken bones – it was also to check workers hadn't stolen a diamond as a way of stealing it.

Each month a 1,000 tonnes of water had to be imported from Cape Town into Kolmanskop as there was no supply in the village.

But the town's fortunes changed with the outbreak of World War One in 1914.

Many of the German prospectors were called home to fight.

By 1927 larger diamonds had been found on the coast and that was the final nail in Kolmanskop's coffin as people dropped tools and travelled in search of the next windfall.

In 1956, the diamond supply had been exhausted and the final residents left – leaving Kolmanskop to return to desert.

It looked like any other American town – but beneath Centralia lay a dangerous and undiscovered secret.

More than 1,400 people lived in the Pennsylvanian town, which had grid-like roads and streets of family homes.

But in 1979 strange things started happening.

First a local gas station was ordered to close down as the underground tanks holding the fuel were too hot and no one knew why.

Two years later, 12-year-old Todd Domboski was playing in his back yard when suddenly a huge sink hole opened up.

He managed to cling on until he could be rescued from the 150 foot deep crater.

Locals initially feared a volcano but the truth was far more sinsiter.

Back in 1962 the fire department were called to burn rubbish in the town's landfill site.

What no one could have predicted was that this was on top of one of America's richest coal seams.

The act started a blaze deep underground, which would go on burning – unnoticed – for almost two decades.

In 1984 all of the town's residents were evacuated as the underground inferno made the ground unstable and was producing high levels of carbon monoxide.

The relocation of the residents of Centralia cost the US $42million dollars.

Many of the homes were demolished in the years since the town was abandoned and the ones still standing have been slowly reclaimed by nature.

No one has ever returned to the formerly bustling town.