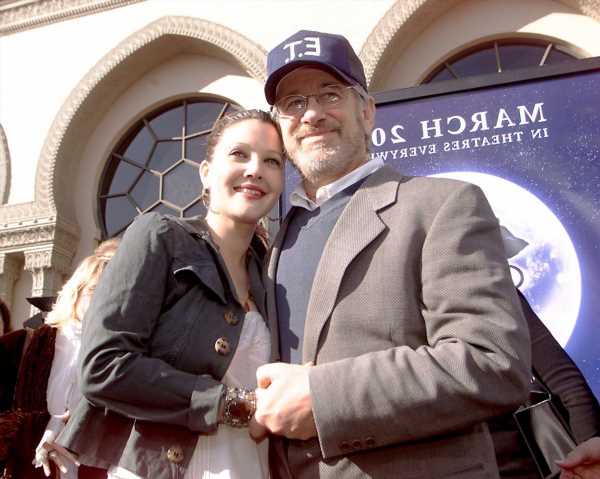 Many people are often surprised to find out that the young girl in Steven Spielberg‘s E.T. is played by a 6-year-old Drew Barrymore. Barrymore achieved success through her performances as a child actor and that can be credited to director Spielberg who cast her in E.T. Spielberg recently shared a story of her casting meeting that shows how she had star potential, even at such a young age.

Drew Barrymore comes from a family of Hollywood actors

Even before appearing in E.T., Barrymore had acting talent in her veins. The Scream actor is the daughter of actors John Drew Barrymore and Jaid Barrymore. John appeared in many movies in the 1950s including The Sundowners, High Lonesome, and The Big Night.

Drew’s lineage goes even further to show that her grandparents and even great-grandparents were actors or entertainers of some type. Drew even has a connection to Spielberg, who is her godfather. You could blame it on nepotism, but Drew has proven to be a talented actor who deserves the success that she has achieved in her career.

In E.T., Barrymore played Gertie, the youngest child of the Taylor family. You may recognize her as the character who screams when she meets E.T. followed by an equally as frightened response from the alien. Working with child actors can be a difficult task for directors and Spielberg wanted to be sure he chose the right ones.

In an interview at a 40th-anniversary screening for E.T. at the TCM Classic Film Festival shared by Variety, Steven Spielberg shared the story behind the casting meeting with the young Barrymore. The West Side Story director was impressed by how commanding she was, especially at such a young age.

“When Drew came into my office, she took over the meeting by storm,” Spielberg told host Ben Mankiewicz. “She stormed the citadel of my office… I said, ‘Do you like acting? She said, ‘I’m not an actor. I have a punk-rock band.’ And she started telling me about this punk-rock band that she had already formed, and she was going to play concerts. I believed her, she has so much inner life. I realized after a while that she didn’t really have a punk-rock band, but if she could believe she did, then she’d believe this little mechanical creature was a real extraterrestrial, and she was in my movie that day.”

Since E.T., Barrymore has found tremendous success in a wide array of genres. Possibly her most successful films are her romantic comedies which include Fever Pitch, He’s Just Not That Into You, and three with Adam Sandler (50 First Dates, The Wedding Singer, Blended). She also dipped her toe in Spielberg’s job with her directorial debut, Whip it.

Now, Barrymore is finding as a daytime talk show host on The Drew Barrymore Show. The show has solid ratings and features entertaining segments with a large roster of guests. The daytime show is currently airing on CBS.