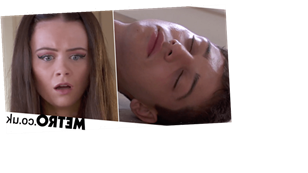 Ollie has been struggling since he visited Buster Smith (Nathan Sussex) in prison.

After a short visit to see his mum, he returned to the village, but he continued to struggle, and it soon came to light that he had been taking drugs.

He asked Juliet to sell him some more, but she refused — that is, until she decided to use his house while Luke (Gary Lucy) and Cindy Cunningham (Stephanie Waring) are on holiday.

Juliet was upset when she set her sights on Ollie after he’d taken drugs, and she attempted to make him see that he’s becoming addicted, before encouraging him to quit.

Ollie refused to listen, and after stealing more drugs from Juliet’s stash, he collapsed on the kitchen floor.

Juliet was horrified when she discovered what had transpired, and therefore swooped into action, calling an ambulance.

Will Ollie be okay?

Or will he die?