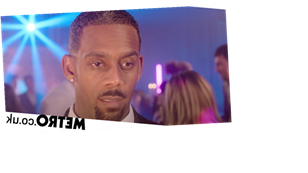 Felix Westwood (Richard Blackwood) has quite the dilemma on his hands in Hollyoaks, as he’s secretly seeing both Lisa Loveday (Rachel Adedeji) and Martine Deveraux (Kelle Bryan) — but he ultimately makes a choice.

Prior to the Channel 4 soap’s hiatus, passion ensued between Felix and Lisa, and it’s safe to say that there was chemistry was aplenty.

However, old wounds — in the form of abuser Cormac Ranger (James Gaddas) returning to the village and threatening him — resulted in him finding himself back in the arms of Martine.

The final pre-lockdown episode (July 20) saw him fail to tell Lisa the truth, and therefore he continued to see both women.

The soap returns on September 7, and — although the timeline will return to the present day — a flashback narrative will allow us to see what happened on Mitchell (Imran Adams) and Scott’s (Ross Adams) wedding day.

The day in question is a huge one for several residents, including Felix, as Grace (Tamara Wall) discovers he’s been two-timing Martine with Lisa.

Grace warns him that this will all blow up in his face, before advising the conflicted man to go for the least complicated option.

After giving it some thought, Felix makes a huge decision on the matter.

The question is: who did he end up sleeping with on that night?

Hollyoaks returns on September 7 at 6:30pm on Channel 4, followed by the return of first-look at 7pm on E4.