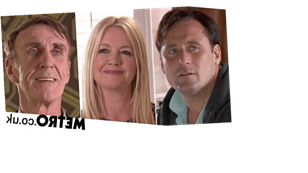 Diane Hutchinson (Alex Fletcher) made a huge choice in Hollyoaks, as she opted to reignite her romance with Edward (Joe McGann) instead of returning to husband Tony (Nick Pickard).

Diane has struggled to come to terms with Tony’s erratic and aggressive behaviour over the last couple of months, and — upon the Channel 4 soap’s return last week — it was revealed that Tony had moved out after a particularly violent moment.

Of course, neither Tony nor Diane know that Edward is the cause of these violent outbursts, as he’s been drugging his son with testosterone in an effort to cause trouble in the marriage.

Diane attempted to make Tony see that she will support him no matter what, but the legendary chef refused to move back home, as he feared that his behaviour could result in Diane or the children getting hurt.

In last night’s episode (September 14), Tony attempted to give Diane the life she deserves, as he tried to set her up with Edward.

Diane was outraged, and this outrage continued into tonight’s episode (September 15), as Edward attempted to make Diane see why he believes he’s the man for her.

Diane asked him to move out, and — after the initial shock subsided — the sinister surgeon manipulated the situation to his advantage once more, using Verity (Eva O’Hara) to convince Diane that she should take a chance on him.

Eventually, Diane decided to do just that, revealing to Edward that she’s chosen him.

Meanwhile, an emotional Tony accepted that his marriage was over.

The question is: will Diane come to regret her decsion?

What’s more, will Tony come to realise that he’s been manipulated by Edward this whole time?